Board Votes to Dissolve Humboldt Pride 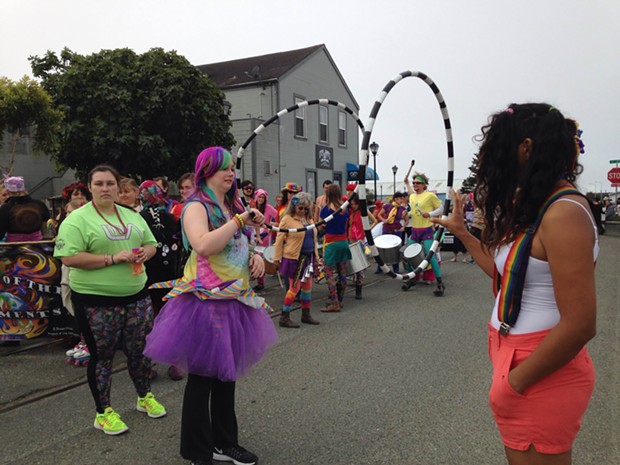 After months of internal turmoil, Humboldt Pride’s board of directors has voted to dissolve the organization, putting the future of Humboldt County’s Pride Week in question.

The move was announced earlier this week on the organization’s Facebook page in a short note to the community, which included thanks to donors and volunteers and concluded optimistically, “We cannot wait to see where this new chapter leads.” The post made no mention of the internal conflict and rancor that has been at a steady boil since August.

Humboldt Pride, a decades old nonprofit dedicated to supporting local LGBTQ communities and putting on the annual Pride Parade, has been experiencing something of a civil war for months. Discontent had already been brewing when, on Aug. 21, an anonymous letter signed “32 Queers” arrived in the email inboxes and Facebook feeds of community members and media outlets. The letter expressed deep frustration with the current Humboldt Pride leadership and claimed board members had excluded and ignored input from the community, particularly those who are transgender, disabled, people of color, under 21 and sober.

In the lead-up to the Pride Parade, a host of Humboldt Pride posters were vandalized and — on the eve of the event — someone used a BB gun to shoot at two homes associated with two active members of the LGBTQ community, with some feeling they were targeted for being “pride dissenters.”

The organization held a mediated forum at Humboldt State University last month to clear the air but then the board abruptly decided to cancel its regular monthly community meeting for Oct. 17, citing “much needed rest.” 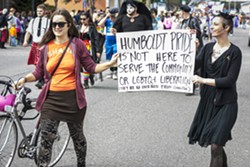 That same day, the board met behind closed doors. All five members, Anthea Proulx, Nawdy Little, Sheri Porter, Zakkary Zoah and Josh Tillet, were already planning to resign in the wake of the conflict leading up to the Pride Festival and the community forum at HSU. To Tillet's disappointment, he says a proposal for a community advisory board to select replacements was rejected by the other members, who pushed for dissolution. According to Tillet, members felt that the organization was already too burdened with problems — relating to administrative record keeping — to pass them on to newcomers. There is also the matter of Humboldt Pride's bylaws requiring current board members to vote in new ones. This seemed unlikely to please the community, and, according to Tillet, by the Oct. 16, meeting just one application for the positions had come in. However, Tillet says, the deadline for board applications was Nov. 1 and a number of people he's talked to were waiting to file until after the group's monthly public meeting.

Eventually, Tillet says, the members voted unanimously to announce the dissolution publicly on Nov. 1. However, Tillet has since expressed regret for his vote in a Facebook post. In it he writes, "as of this day, October 25th, 2016, I officially rescind my vote to dissolve Humboldt Pride Inc. and I fully support the proposal that was written by Loren Cannon and other community members that details how to form an advisory board to aid in the voting on of new board members." Neither Zoah nor Little would comment on the dissolution of Humboldt Pride when contacted by the Journal, with Zoah hanging up the phone abruptly after stating he had no comment.

Because it is a 5013c nonprofit, dissolving Humboldt Pride requires that any funds it has remaining be distributed among other nonprofits of the same classification. "It just means we're going to literally start over," says Tillet. Anyone looking to put together the Pride Festival won't be able to draw on the organization's existing coffers. "We have to start from the ground up."

Over the phone, Tillet says the dissolution, which becomes final on Nov. 30, is "not 100 percent final. … The board has every opportunity at this moment." They could reverse the decision, but it appears it's not going to happen, given the earlier than planned Oct. 26 announcement of the dissolution on Humboldt Pride's Facebook page. In fact, the same page already includes an announcement for "Our Pride Festival: What Now? A Community Discussion and Potluck" hosted by the Humboldt LGBTQ+ Community Space Project, scheduled for Nov. 6 at the Jefferson Community Center.

Meanwhile, online backlash to the decision has already gained steam.

“For a long time I’ve been frustrated that certain people were using this organization to throw boozy parties on someone else’s dime, and now I’m upset and disappointed that rather than listen to the community, a Board of Directors led by Nawdy Little has decided to spite all of us by destroying the organization entirely rather than allowing others to clean up her mess,” wrote Victor Feyling on Facebook.

Tillet is headed to Club Triangle tonight, an LGBTQ community night at the Jam. He knows there may be some tension in the room, but he's optimistic. "People are going to rise up, the community is going to come together," he says. "And that's something worth celebrating."

After much consideration and deliberation, it has been decided that Humboldt Pride Inc. will be dissolved. Humboldt Pride would like to thank everyone and every organization that donated time, effort and funds. Your involvement was, and is, greatly valued. Humboldt Pride has been fortunate to serve such a beautiful community for so long and we are very excited to see this community continue to thrive.
Humboldt Pride Inc. will be ceasing operation entirely as of November 30th, 2016. As of that date, Humboldt Pride Inc. will not be involved with or participating in any events or fundraisers. However, we will be using any remaining resources to support local organizations that are continually striving to support and encourage our local LGBTQ+ community, as well as our community at large and we encourage all of you to continue to do the same.
Thank you again to our Humboldt County family, as well as all of our extended family, for everything you are and have been to us and allowed us to be to you. We can not wait to see where this new chapter leads.