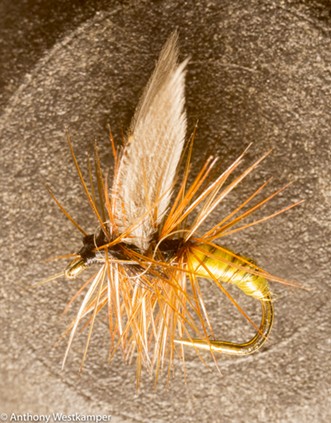 A very long time ago I got into fly fishing. It is a highly technical method for fooling an animal with a brain smaller than a pea into thinking that bits of feathers and fluff are something good to eat. Those somethings are usually members of three orders of insects: mayflies, stoneflies and caddisflies. The first books written on the subject appeared in the 1400s. A study that has been around that long has a bit of its own terminology apart from more formal entomology.

Even the names of the critters are different, based more on appearance than close family relationships.
Mayflies (order ephemenoptera) are probably the most important group to know. They start life as an egg, hatch into a tiny dark “nymph” that feeds, grows and molts several more times until it pulls itself out of the water and deploys wings and breathes air for the first time.

That first airbreathing form has one job: to get out of the water. Shortly after that it molts again when it has a different job to do: mate. Entomologists call these phases “sub-imago" and "imago.” While fly fishers call them "duns" and "spinners.” Combined, the dun and spinner phases live only a few days. Throughout the year there are “hatches” which can fill the air with these harmless, dainty creatures. During such hatches trout will often start feeding selectively on them to the exclusion of all else. If you want to catch anything you need to present something that looks like what they’re feeding on.

A really dedicated angler will catch a specimen of whatever insect the fish seem to be eating and attempt to duplicate its appearance with bits of fuzz and feathers. This is called “matching the hatch.” When that doesn’t work, the fisherman may try any number of options, like flies tied to resemble bees, wasps, grasshoppers and ants. You can tie your own flies, but many of those tiny works of art in a fly shop are not so much designed to catch fish as a fisherman’s wallet.