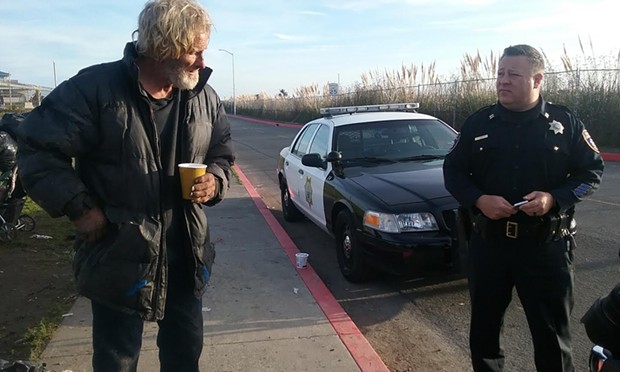 As on many other mornings, the deadline for campers to leave the temporary sleeping area came and went with people packing their belongings onto shopping carts in the mud as the Eureka Police Department stood by and waited. The official deadline was 9:30 a.m., but at 11:30 the last of the 30-plus people staying in the fenced area next to Eureka’s Wharfinger Building were still preparing to leave. Nezzie Wade, an advocate with Affordable Homeless Housing Alternatives, said one pair, apparently having slept through the mass eviction of their neighbors, woke up as an officer prepared to take down their tent.

Some questions as to why the program was so abruptly halted have gone unanswered, such as why the city decided to give notice to those camping in the area the night before they were supposed to move.
In a press release issued this morning, City Manager Greg Sparks said the city made the decision “after weeks of discussion and consultation with senior staff, including the Chief of Police. The decision was made in the best interest of the City of Eureka and all of its citizens.”

Although the Eureka City Council voted on the locations for the camps under its Shelter Crisis Ordinance, authority and oversight of the program ultimately fell to city staff, which issued notices that the program had ended to those using the area at around 6 p.m. last night.

Eureka Police Department Captain Steve Watson, who was onsite early in the day, said that the six months the program had been in place was “ample time” for those staying there to find other resources, and that many of those in the area were “more recalcitrant” holdovers from the entrenched Palco Marsh camp who had failed to respond to efforts for service.

The city’s press release cited “numerous complaints from surrounding businesses, citizens who use the public areas, homeless advocates and the homeless regarding the conditions of each area.”
Watson also said there was a marked increase in crime associated with the area, including crime against people sleeping there. According to EPD’s statistics, “53 percent of violent crime reports in the last quarter involved homeless transients either as the victim or suspect.”

According to city officials, neighboring businesses have complained of thefts, graffiti, public urination and panhandling.

Watson acknowledged that not all of that 53 percent was specifically associated with the sleeping areas. However, he said the program was resource intensive and ultimately beyond the scope of duties for his officers and city employees, who have borne the brunt of enforcing the camping laws, with some discretion on rainy days or days when people were slow to move.

“We’ve tried to find a reasonable balance between the letter of the law and the reality of the situation,” said Watson. 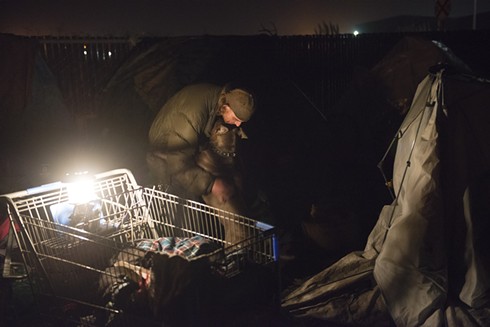 It's 9 p.m., and Anthony, who prefers to be called "Crow," is helping his friend "Bean" light a camping lantern.

"You're going to blow yourself up," says Crow. But he leans in all the same to look at the lantern, which is resting on a pallet next to Bean's tent, taking the lighter impatiently from his friend's hand.

"Well, just give me a round of fucking applause then if I do," replies Bean.

After some tinkering, the lantern comes to life, illuminating the cluttered, muddy surroundings of their makeshift camp, with around two dozen tents packed cheek to jowl in a small, fenced-in area just south of the Wharfinger Building parking lot. Music blasts from tinny cell phone speakers and from larger stereos. Dogs strain on leashes and bark. It's not a restful place. For most of the two weeks it has rained, filling the tents with gritty mud. But it is the place where some 30 people have taken refuge for the last six months, along with two other designated parking lots that the city of Eureka has been using as rotating "low-enforcement areas," allowing people to erect tents between 7 p.m. and 7 a.m. But as of 6 p.m. on Nov. 2, that policy abruptly came to a halt, with the Eureka Police Department arriving and announcing that Crow, Bean and everyone else staying in the area must leave by 9:30 the next morning. 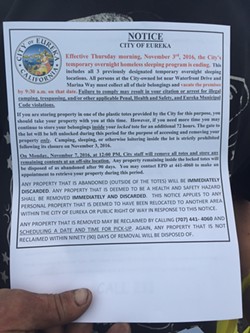 Crow, 29, says he has been homeless since age 17, when he left a state institution. He and Bean both once lived in the Palco Marsh, which the city cleared of its longstanding homeless encampment in May.

"The marsh was home," says Crow. "Everybody you see right here, we're like family."

The two men talk like brothers, exchanging epithets. Bean says a head injury has made it impossible for him to work. He lived in the Palco Marsh, what he calls the Devil's Playground, for 17 years. He would go to his family in Georgia but he heard that other states put down pitbulls. He's very attached to his pitbull Leroy. Neither know where, exactly, they will go in the morning.

"I'm going to keep trying to do what I do everyday," says Crow. "Survive."

He and Bean plan to be up and out of the camp before daylight.

Just outside the fence, a fracturing couple are fighting over ownership of a dilapidated R.V. The man screams for the woman to give him his ring back.

Bean's dog, Leroy, whines and tries to pull away from his owner as another woman walks past with her dog, checking in on the street-side drama.

Trina, a middle-aged woman holding a can of malt liquor, tells us that some of the camps got flooded out. She's been in Humboldt for less than a year, arriving after her daughter, who's also homeless, picked her up in Oregon. The two now live in the camp together, along with Trina's husband Billy.

"They took me in as family," she says. "I don't want to go anywhere else."

It is difficult to say where most people will go once the camp is dissolved. The notice from the city warns that illegal camping will result in ticketing. A few people may go into the Blue Angel Village, but that program is currently not accepting clients until it moves to its new location at Koster and Washington streets. According to the Eureka Police Department and neighboring business owners, crime has increased in the area since the temporary rotating sleeping area program began. City Manager Greg Sparks has said the city's Housing First program had run into issues matching people with housing, and as of one week ago, said the city would like to phase out the sleeping area program but had no alternatives.

Scott Dean, who moved to Humboldt from Redding last week, says he plans to stand his ground, keep his tent up and risk arrest. His fiancé has pins in her knees and ankles and could not walk easily, and he couldn't find a place for them both to stay.

Dean, who works down the road in the fisheries, says he worries about people being violent in the night as tension grows. Already, he has seen a tent "get torched." But at 11 p.m., with eviction still 10 hours away, most residents were still in good spirits. Some members of the makeshift family said they would march on City Hall in the morning.

Affordable Homeless Housing Alternatives board President Nezzie Wade filmed the below video on a recent visit to the camp.