3rd UPDATE:
The final election night reported has been posted with 100 percent of Humboldt County precincts reporting, and not much has changed with local contested city council races.

Austin Allison has bested John Fullerton in Eureka's 4th Ward, the Arcata incumbents have held their seats, incumbent Ferndale Mayor Don Hindley has won himself another term and Frank Wilson and Susan Strahan have secured victories in Rio Dell.

2nd UPDATE:
With the third report posted and 37.8 percent of Humboldt County precincts reporting, Austin Allison continues to widen his lead over John Fullerton in the race to become Eureka’s next 4th Ward council member. Allison has widened his lead to about 550 votes, and leads by more than 10 percentage points — 54 to 44.

Up in Arcata, meanwhile, the three incumbents — Susan Ornelas, Michael Winkler and Paul Pitino — continue to hold seemingly insurmountable leads over challengers Daniel Murphy and Valerie Rose-Campbell, with Ornelas leading the way with 28.52 percent of the vote.

Farther south, an interesting race is taking shape in Rio Dell, where three candidates — Frank Wilson, Susan Strahan and Bryan K. Richter — are vying for two seats. Currently Strahan leads the pack with 37.65 percent of the vote, followed by Wilson with 32.01 percent and Richter with 29.1 percent.

1st UPDATE: Austin Allison expanded his lead in the 4th Ward race for a Eureka City Council seat with 53.94 percent of the vote to John Fullerton’s 45.68 percent in the second round of election results.

Allison said he had his “fingers crossed” and wanted to thank everyone involved in his campaign.

“I’m just so thankful for the community taking the time to vote for me and supporting my platform,” he said.

Fullerton said he was also waiting to see more numbers, including outstanding absentee ballots, and noted his 30-year commitment to serving the community will not change regardless of the results.

“I will continue to do that in the future,” he said.

Fullerton added that he believes Allison has “a lot to learn” about the city and its communities.

“I will be glad to get him up to speed if he wants my help,” Fullerton said.

Meanwhile, numbers for the remaining races stayed the same.

PREVIOUSLY:
Austin Allison took an early lead in the race to represent Eureka’s 4th ward with 50.94 percent of the vote over fellow contender John Fullerton’s 48.61 percent in the city’s only contested council race this election.

While the two candidates showed little in the way of major differences on the main issues facing the city at debates, the campaign took on a certain new guard versus old guard air when it came what they brought to the dais.

Fullerton — an accountant and 40-year resident of Eureka — touted his experience as a business owner with a track record of civic service, including his appointments to the Humboldt County Budget Oversight Committee and the Citizens Advisory Committee for the Eureka general plan. He also se 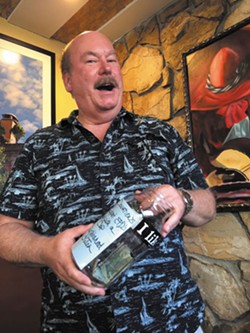 rved as an elected member of the Eureka City Schools board.

In contrast, Allison highlighted his young age — he’s 25 — and relatively newness to the city, having moved to Eureka in 2009, with the St. Joseph Hospital cardiac monitor technician and his supporters saying he would bring a fresh perspective, new energy and a positive outlook to the role.

The seat is currently held by Councilmember Melinda Ciarabellini, who decided not to run for reelection. Eureka Faith Center co-pastor Heidi Messner ran unopposed for the city’s 2nd Ward seat.

Over in Arcata, incumbents Michael Winkler, Susan Ornelas and Paul Pitino are looking likely to remain in their seats, garnering 28.48 percent, 27.88 percent, and 24.06 percent of the vote, respectively, to challengers Daniel Murphy, at 9.68 percent, and Valerie Rose-Campbell, at 9.33 percent.

Blue Lake incumbent Adelene Jones was ahead in the race for the three open council seats with 44.44 percent of the vote, with write-in candidates Barbara Ricca at 20 percent, Deborah Ann Jacobsen at 6.67 percent and Summer Daugherty at 20.56 percent.

The race for Ferndale’s mayor had incumbent Don Hindley at 72.20 percent, ahead of challenger Steve Nunes with 25.85 percent.

Rio Dell has three candidates going after two open council seats. Incumbent Frank Wilson was at 32.29 percent of the vote compared to challengers Bryan K. Richter, at 27.80 percent, and Susan Strahan at 39.01percent.