Eureka Police Officer Stephen Linfoot testified today that he was one of three officers shouting commands with guns drawn in the seconds before he opened fire on Thomas McClain, continuing to shoot as the 22-year-old began falling over and after he hit the ground.

“He was reaching for the gun and that’s when I shot, but I can’t clearly say whether he got his hand on the gun,” Linfoot said under questioning from attorney Dale K. Galipo, who is representing McClain’s parents in their federal wrongful death lawsuit.

McClain died after being hit by three of the seven rounds that Linfoot fired during the late-night confrontation on Sept. 17, 2014, on the front lawn of the Allard Avenue townhouse where McClain lived with his cousin.

The weapon spotted by officers in McClain’s waistband turned out to be an unloaded BB gun that was a realistic replica of a handgun. Linfoot was the only officer to shoot.

Humboldt County District Attorney Paul Gallegos announced in November of 2014 that no criminal charges would be filed in the case after he reviewed a multi-agency Critical Incident Response Team investigation into the shooting.

Galipo asked Linfoot a battery of questions about his training and the use of deadly force before focusing on the commands that officers gave to McClain.

Linfoot testified the area was well lit and that McClain appeared to be compliant with the original instructions to put his hands up and walk down the slight grassy slope toward officers on the sidewalk in front of his Allard Avenue home.

McClain lowered his hands twice and each time he was told to put his arms back up in the air, which he did until the third time when both hands went toward his waistband, Linfoot said.

“I recall hearing a command of, ‘Get your hands up,’ and heard someone say something to the effect of, ‘He has a gun,’” the officer testified, noting the handle of the BB gun became exposed when McClain lifted his arms, drawing his shirt up from his waist. 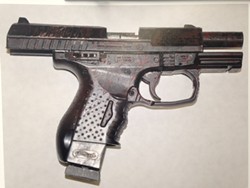 Dressed in a charcoal gray suit with a blue dress shirt and tie, Linfoot testified he has heard the police dash cam audio recordings from just before the shooting in which someone appears to yell, “Get down,” immediately followed by gun fire.

“It sounds to me like an interrupted command,” the officer said. Linfoot also testified the voice “sounds like me.”

Linfoot took the stand following opening statements during which attorneys layed out differing versions of the tense moments before shots were fired that September night.

Both attorneys also walked jurors through the unrelated surveillance effort on a neighboring residence that initially caused officers to cross paths with McClain.

U.S. District Judge William Orrick III also briefly addressed jurors about the case, saying they would be deciding whether Linfoot used excessive, unreasonable force against McClain and whether he was negligent.

The city of Eureka, Orrick said, has also chosen to put on what’s known as an “affirmative defense,” and will attempt to show McClain’s own negligence contributed to his death and that Linfoot was acting in self-defense and in the defense of others.

In his opening statement, Galipo said the case comes down to two main issues: whether the use of deadly force was excessive and whether the way the police officers handled the situation was negligent.

Describing McClain as compassionate and the type of person who would go out of his way to help others, Galipo told jurors “the family, you will hear, has been devastated by the loss of a 22-year-old son.”

The city’s attorney, Nancy Delaney, told jurors that Linfoot fired in self-defense when it appeared his life and those of the other officers were in danger. His actions, she said, were appropriate.

“We’re not here, in any way, to belittle Mr. McClain or the relationship he had with his parents,” Delaney said.

Witness statements and the audio tape, Galipo said, will show McClain was trying  to comply with confusing and conflicting commands in the moments before he was shot. Galipo also told jurors that expert testimony will demonstrate that Linfoot “overreacted” when he fired seven times and other options were available.

McClain, who had a slight hearing impairment, had been out celebrating his cousin’s birthday, but there was no indication that officers noticed he had been drinking, Galipo said.

In contrast, Delaney said the evidence will show that McClain took a confrontational stance when he was first approached by an officer, sending up “a red flag” by telling then-Sgt. Brian Stephens that he didn’t have a right to search him.

“Mr. McClain never communicated in any way, ‘I’m hard of hearing.” ‘I’m not understanding you because I’m drunk.’ ‘I’m confused as to what you want me to do,” Delaney said in her opening statements.

The officers, who were in the area looking for a subject on Eureka’s Most Wanted list, had observed McClain confront another man on the street and then saw him “fiddling” with his waistband, putting police on warning that he could have a gun, Delaney said.

After the interaction, Delaney said, McClain appeared to be "puffing up as if preparing for a fight."

“The overwhelming evidence in this case will be this event occurred not because of any choice officer Linfoot had but because Mr. McClain appeared to reach for a semi-automatic pistol,” Delaney said.

Linfoot is scheduled to retake the stand Tuesday.

Editor's note: This story was updated from a previous version to correct an error concerning which Humboldt County District Attorney determined no criminal charges would be pursued against the involved officers. The Journal regrets the error.