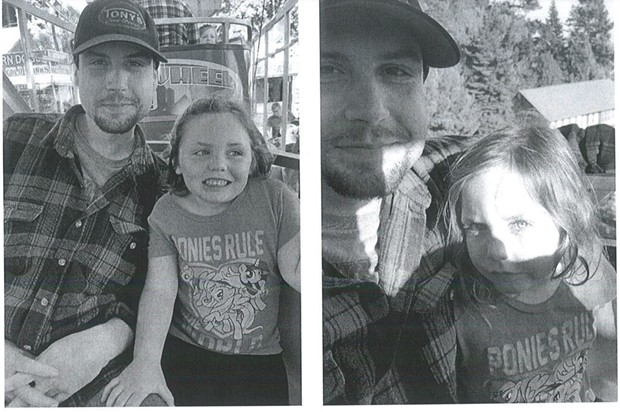 Anthony Lux returned his 4-year daughter, Alison Shirey, to her legal guardian last night. Lux and his daughter were the subject of a three day search after he took her from her guardian's home Sunday night.

According to a press release from the Sheriff’s Office, Lux stated he had received advice that he had the legal right to remove his daughter from the home. Selena Zorilla-Mendoza, the HCSO public information officer, said there were no plans to press charges against Lux at this time.

From the Humboldt County Sheriff’s Office:

On Tuesday, November 29, 2016 at about 10:50 p.m. Anthony Lux met with Humboldt County Sheriff’s Deputies to return his daughter, Allison Shirey. Lux spoke with Investigators and stated he had received advice that there were no court orders in regards to Allison’s guardianship and he had legal rights to remove Allison from the home. Lux agreed to return Allison after speaking with Investigators after realizing his actions were unlawful and plans on pursuing custody of his daughter.

Deputies returned Allison to her guardian and was removed from the missing persons system. Allison was in good health and good spirits.

The Sheriff’s Office would like to thank the public and media for their assistance in attempting to locate this child.

The Humboldt County Sheriff's Office is searching for 4-year-old Eureka girl who was reportedly taken by her father on Sunday night without permission.

Anthony Lux, 31, was given a ride to St. Joseph Hospital from a Hillside Court residence where he was last seen with Allison Shirey but did not check in and has not been seen since then, according to a sheriff's office release.

The girl's legal guardian, who has temporary custody of Allison, was in another part of the home when Lux left with his daughter, officials said.


On Sunday, November 27, 2016 at about 7 p.m. Humboldt County Deputy Sheriffs responded to the 4100 block of Hillside Ct. in Eureka for a reported child abduction by parent. The reporting party told deputies when she was in another part of her residence, Anthony Lux (31) unexpectedly left with his daughter, 4 year old Allison Shirey. The reporting party provided court documentation stating she has temporary physical and legal custody of Allison. Lux did not have permission to take Allison from the residence.
It was later discovered Lux received a ride from the residence on Hillside Ct. to St. Joseph’s Hospital. Lux did not check into the hospital and has not been seen since. Lux has connections in Alderpoint, Eureka, McKinleyville, Montegue (Siskyou County) and Chico (Butte County). Lux’s whereabouts are unknown at this time.
Anthony Lux is a white male adult, 5’8”, 160 lbs, with brown hair and brown eyes. He was last seen wearing an olive colored pea coat, black pants, and black shoes.
Allison Shirey is a 4 year old girl, 3’ tall, 50 lbs, with blue eyes and brown hair. She was last seen wearing pink pants with owls on them and a white shirt with blue and pink flowers.
A Be-On-the-Lookout (BOLO) was issued for Lux. Anyone with information for the Sheriff’s Office regarding this case or related criminal activity is encouraged to call the Sheriff’s Office at 707-445-7251 or the Sheriff’s Office Crime Tip line at 707-268-2539.


Editor's note: The original version of this story incorrectly identified the relationship between Allison Shirey and her legal guardian. The Journal regrets the error.