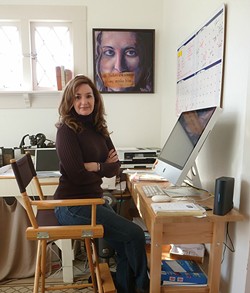 Caroline Titus is one of two reporters being honored by the First Amendment Coalition this evening during the California Press Foundation's annual meeting in San Francisco.

Titus will receive the Coalition's Free Speech and Open Government Award as an acknowledgement of her 18-month battle with the Humboldt County Fair Association over disclosure of its financial records. The long court battle, which began not long after her husband, Stuart Titus, was let go from the fair board in 2012, was covered by Titus in The Ferndale Enterprise. The Tituses filed a successful First Amendment and wrongful termination suit, alleging that the Fair Board had fired Stuart Titus because he refused to suppress his wife's coverage of the fair board.The Tituses settled their suit for $150,000 in January of 2016, after an intense back-and-forth that included an attempt by the fair association to subpoena her gynecological records.

Reached yesterday by phone, Titus said she was "extremely proud" to be receiving the award, but in the meantime, "the beat goes on." She was putting the latest issue of the Enterprise to bed even as she prepared her acceptance speech.

Titus added that she planned to speak about how the saga with the fair board reflected some of the national conversation about politics and the role of the media.

"[Late Ferndale artist and Enterprise contributor] Jack Mays always said there’s 1,400 people in the nation and we’ve got them all in Ferndale," said Titus."It’s fascinating to me what’s going on the national media... [they] are asking what do we do. I just say keep doing your job."

Titus added that the Enterprise has a current suit against the fair board, again asking for their financial records. The board changed from a public entity to a nonprofit in 2015 in an attempt to duck regulations around disclosure of information, Titus said.

"We’ve been reporting on the Humboldt County Fair Association for over 100 years," said Titus. "It’s critical that the community know what is happening financially with the fair and the fairgrounds. It receives public money and the public has the right to know."

In its press release, the California press Foundation said Titus and her co-recipient, Bay Area investigative reporter Thomas Peele, "are being recognized for their diligence in pursuit of access to records in order to report stories that advance government transparency and 'the people's right to know.'" Each recipient will receive a plaque and $1,000.