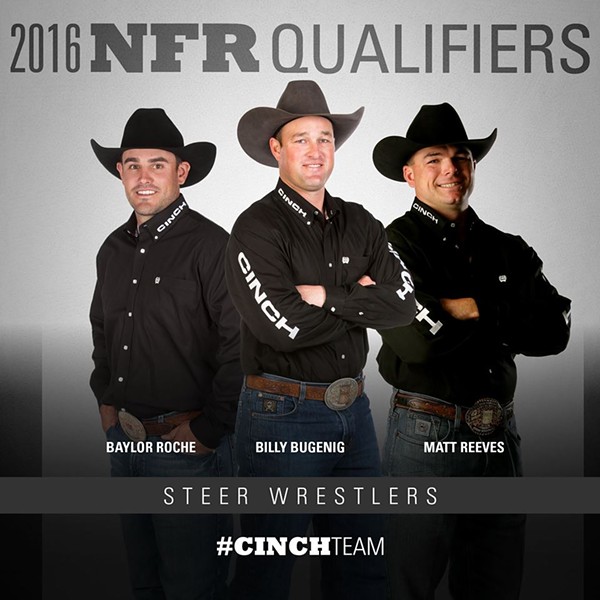 Bill Bugenig, a Ferndale High School graduate and career rodeo cowboy, will compete in professional rodeo's "Superbowl" tonight, as he rides into the arena at the Thomas & Mack Center in Las Vegas for the 2016 Wrangler National Finals Rodeo.

Bugenig is a professional "bulldogger," or steer wrestler, and tonight he will be riding a gray horse named Two Guns as he bears down on a bovine that weighs anywhere from 350 to 650 pounds. Whether or not he takes home the buckle will depend on how fast and agile he is as he leans down from the horse to grasp the steer's horns, ultimately leaving the saddle to wrestle the steer to the ground. This process should be accomplished within three seconds. The sport is fast-paced, dangerous and physically demanding.

Bugenig, who played football, basketball and baseball for Ferndale High School as well as competing on the rodeo team, says he tried his hand at a number of different rodeo events but his larger size made bulldogging the best fit.

"I just kind of did the best at that as I got older," he told the Journal, adding that he has dealt with some injuries during his career, including surgery nine years ago on his pectoral muscle. At 35, Bugenig is also older than many of his competitors, whose ages skew toward mid-20s.

"There’s a lot of competition," he said. "There’s a whole new group of guys now, they’re younger and hungry. It’s a tough competition."

But Bugenig's experience seems to be serving him in good stead. This is his fourth time qualifying for the National Finals Rodeo. He shared an Average title with another cowboy at the NFR in 2010 and won both the 2014 Airdrie ProRodeo in Alberta, Canada and Big Sky ProRodeo Roundup in Great Falls, Montana.

Bugenig told the Journal he is excited for tonight and plans to be back on his Ferndale ranch in about 10 days. He doesn't have any big plans though.

"I'll probably just get back to work," he said.

The competition kicks off tonight at 6:45. Good luck, Bill!