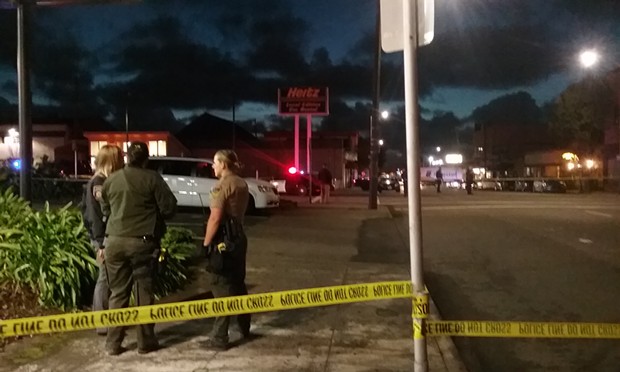 EPD Chief Andrew Mills gave a statement to the press at around 7:40 p.m., saying that the incident originated with a call from the California Highway Patrol at around 4:43 p.m. asking EPD to assist with a suspect with a gun having “footbailed” from a car. EPD officers were in the middle of a shift change, ensuring that many were on hand to pursue the suspect, who was described by witnessess as a young male with dark hair, wearing camouflage pants.

Witnesses also called into dispatchers reporting an armed suspect. Mills said the suspect went over fences with officers in pursuit and there were shots fired. The pursuit went toward EPD headquarters, then to Fifth Street. At 4:52 p.m. the suspect apparently attempted to steal a vehicle and, when approached by officers, he again fled on foot, at which point he was shot. A firearm was recovered and held for evidence, Mills said.

Mills said the suspect is in surgery and his condition is unknown. Four officers were involved in the shooting.

“This was a hairy situation,” added Mills. “We are very thankful none of our officers or civilians were hurt.”

Mills did not take questions, saying there was not enough information at this time.

The officer-involved shooting currently under investigation by multiple agencies began with a foot pursuit near Roy’s Auto Center.

According to scanner traffic captured and posted by the Lost Coast Outpost, officers reported a suspect fleeing on foot near Roy’s and a pursuit ensued, which took the suspect and officers to the rear parking lot of the Eureka Police Department, where shots were fired, though it’s unclear by whom. The pursuit then continued toward Fifth Street, where more shots were fired, though it’s again unclear by whom.

Officers then reported the suspect was hiding behind a black vehicle on Fifth Street between A and B streets, and requested that an ambulance stage nearby. Another officer can be heard on the scanner then warning that civilians and a California Highway Patrol officer near Fifth and A streets were potentially standing in the “cross fire,” and asked that they be moved.

About a minute later, an officers tell dispatch they’re preparing to bring in the canine before another officer tells him to hold off, saying officers had the suspect “covered.” “Just hold the dog,” the officer said. “They have him covered. We will go up and detain him.”

A moment later, an officer responds that police “have a shield en route, if you can stand by just a minute.” The other officer responds, “He’s covered. I’m comfortable with this. Just hold the dog. Lower your weapons.”

About 40 seconds later, an officer asks dispatch to send the ambulance, staged at Sixth and B streets, to the scene, saying officers have “one detained.” The officer gives the “Code 4” call, indicating the situation is under control.

An officer then asks dispatch to conduct a roll call officer check to make sure all involved officers are accounted for.

PREVIOUSLY:
An officer-involved shooting in Eureka late this afternoon sent an unidentified man to the hospital. His condition is unknown.

Details are scant at this point but EPD Capt. Steve Watson said no officers were physically injured in shooting, which occurred near the intersection of Fifth and B streets at around 5 p.m. EPD currently has the street closed to traffic and is calling in officers from allied agencies to assist with the investigation.

We’ll update this post with additional information as we can get it.

This is the third officer involved shooting within Eureka city limits in the last 13 months, though it's the first involving an EPD officer since police shot and killed 22-year-old Thomas McClain on Sept. 17, 2014.