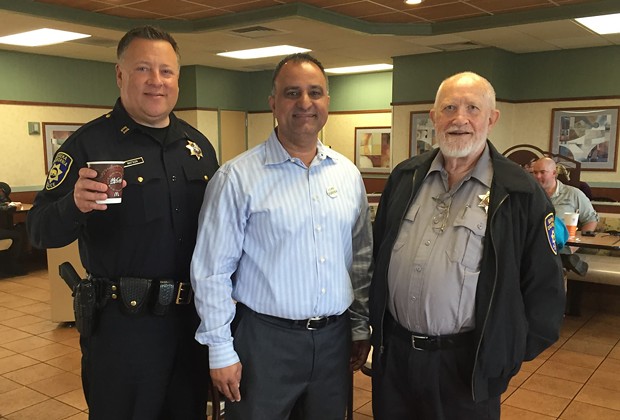 Eureka Mayor Frank Jager described Sears as a person who “put himself out there for what he believed” and had the facts to back up his argument.

“Sometimes going over to his house or having lunch with him was like being taken to the woodshed,” Jager said of Sears’ propensity for taking elected officials to task if he disagreed with their decisions. “He really knew his stuff.”

Sears, whose Facebook pages states he was born in 1934, died sometime between Sunday night and Monday morning.

A Korean War veteran actively involved in an annual wreath laying ceremony on Humboldt Bay to honor the fallen, Sears was at the helm of the Humboldt Taxpayer’s League in 2005 when the group filed a lawsuit against two Eureka waterfront developers, alleging a conflict of interest because they served on a city advisory board.

While the case was eventually taken over by another city resident before ultimately being thrown out, the league’s decision and its aftermath marked one of the more contentious chapters in the city’s recent history.

More recently, in 2015, Sears filed an ongoing conflict of interest lawsuit alleging the Humboldt County Harbor, Conservation and Recreation District board’s decision to accept a loan from Coast Seafoods and then provide the company with a lease extension was a violation of state law because one of the board's member, Greg Dale, is employed by the company.

“In the form of an understatement, he spoke his mind,” said attorney Bill Bertain, who’s known Sears since 1979 and represented him in the harbor district lawsuit. “You didn’t always agree with Leo, but you listened to him.”

“He always believed in good and transparent government,” Bertain added.

A graduate of Eureka High School and Humboldt State University, Sears retired from his career as a senior auditor-appraiser with the county of Humboldt in 1996.

A frequent contributor to the Times-Standard opinion page, Sears served as a longtime member of Eureka’s Finance Advisory Committee and was well-known for voicing his views on how the city allocated its budget, especially when he disagreed. Over the years, he also volunteered with the Eureka Police Department.

“Leo voraciously fought to use taxpayer money for public safety and was willing to lay his skin on the line to do so,” Eureka Police Chief Andrew Mills said in an email to the Journal on Tuesday. “He will be missed.”

Jager said Sears, whom the mayor had appointed to several city commissions, was “heavily involved in the pulse of politics” and kept a file on just about every issue facing the city and county.

“I lost a friend. I lost someone who kept me on my toes,” Jager said. “He was a great person for this community. I wish we had more of them.”