UPDATED: One Time at Band Camp 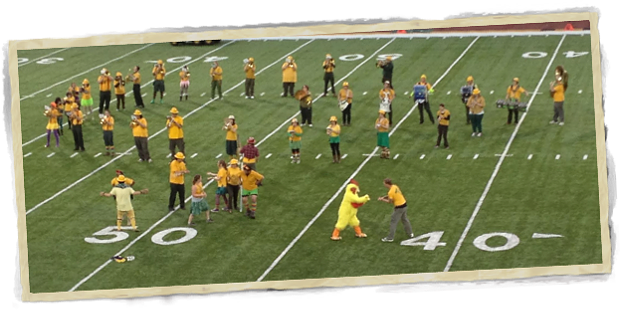 UPDATE:
The Humboldt State Lumberjack's only learned the allegations that led to the band's suspension through a university press release, according to a statement issued Friday.

The Lumberjacks claim university "representatives" have failed to respond to requests from band leadership for details regarding the allegations facing the band, which include boozing it up, graffiti and "inappropriate printed materials and photographs" in the on-campus band room.

"The band is growing increasingly frustrated with the university's lack of official communication," the Lumberjacks say in the statement. See the full release copied below.

PREVIOUSLY:
Cue a sad trombone sound. The rollicking, helmeted Marching Lumberjacks have been benched. Humboldt State University sent out notice that it's investigating policy violations regarding booze, graffiti and "inappropriate printed materials and photographs" at the band's on-campus digs. For now, the band kids are on suspension. HSU reps had no further comment beyond the statement below.

Humboldt State University has placed the Marching Lumberjacks Band on suspension while it investigates possible violations of University policies. The investigation may extend well into the spring semester.

During the suspension, the band will not be allowed to represent the University locally or outside the region, and it will not have access to campus services that are available for recognized student organizations.

The suspension follows the discovery in the band’s on-campus space of inappropriate printed materials and photographs, graffiti, open containers of alcohol, and numerous safety and building code violations. The space has been locked and secured, and the University has begun the process of returning personal belongings to club members.

In the California State University system, if student organizations or individual students are found responsible for policy violations, they face disciplinary action ranging from a warning to expulsion. In order to protect the rights and privacy of both students and employees, the University will only be able to provide general information on the investigation.

The Marching Lumberjacks are aware of the press release from Humboldt State University
on December 14, 2016, regarding our organization’s suspension.
To date, University representatives have not responded to requests from the band’s student
leadership for details regarding the specifics of the alleged violations.
The band is growing increasingly frustrated with the University’s lack of official
communication.