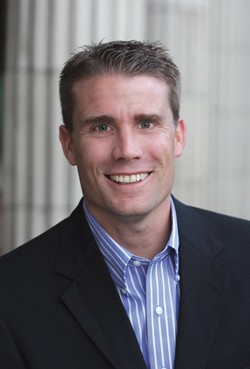 As members of the Electoral College set about casting their votes today, two state senators — including the North Coast’s Mike McGuire — announced they would introduce legislation requiring presidential candidates to release their tax returns to appear on the California ballot.

The legislation, slated to be introduced in January, is the second to be proposed by a local representative in response to a Donald Trump presidency. While Trump was not mentioned by name, Congress Jared Huffman introduced the “One President at a Time Act” on Dec. 13 to “ensure that U.S. foreign policy is conducted only by the sitting president," according to a release from his office.

Saying transparency is a non-partisan issue and voters deserve full disclosure, McGuire said the tax return legislation is necessary to reveal a presidential candidate’s potential conflicts, noting “the world is a dangerous place.”

“This legislation will help make transparency great again,” McGuire said in a release.

Read the full release from senators Mike McGuire and Scott Wiener below:

Today California State Senators Scott Wiener and Mike McGuire announced that they will be co-authoring legislation to require that any future presidential or vice-presidential candidate must make their tax returns public to appear on the California ballot. The two Senators are offering the legislation in response to President-Elect Donald Trump’s refusal to release his tax returns to the American public, despite the fact that presidential candidates have been doing so voluntarily for decades. The bill will be modeled on similar legislation that has been proposed in New York by State Senator Brad Hoylman.
“Transparency is a non-partisan issue. Voters not only deserve full disclosure of their future leader’s tax returns, they should be entitled to them,” Senator McGuire said. “The world is a dangerous place and all potential conflicts of interest a future president may have, let alone dangerous ties a candidate may have with a foreign government, must be disclosed. This legislation will help make transparency great again.”

“The American people deserve honesty and transparency from their President. Unfortunately, we are getting lies and obfuscation from President-Elect Trump, especially in regards to how his business interests may impact his administration,” said Senator Wiener. “While the impetus for this legislation is the refusal of Donald Trump to partake in what has become standard practice among presidential candidates, this is also a larger, non-partisan issue. The American public deserves to know that the individual they are selecting to be president will have their best interests at the heart of every decision, not the best interests of any business venture or investment fund. Requiring that this basic financial information be made available to voters will help build critical public trust.”

Prior to Donald Trump’s refusal to release any tax returns, every president since Jimmy Carter has released at least one year of tax returns. During the 2016 Presidential election, Hillary Clinton (Democratic) and Jill Stein (Green) both released their tax returns. McGuire and Wiener plan to require that presidential and vice-presidential candidates release five years of tax returns in order to appear on the California ballot for future elections.

In New York, State Senator Brad Hoylman has introduced Senate Bill S8217, which has called the TRUMP Act – the Tax Returns Uniformly Made Public Act. New York’s S8217 requires that any presidential candidate must file five years of tax income returns no less than 50 days prior the general election in which they wish to run. If they do not file, they will not appear on the ballot.

Senators Wiener and McGuire will formally introduce the legislation in January.