Little Free Libraries: Giving the Gift of Giving Year Round 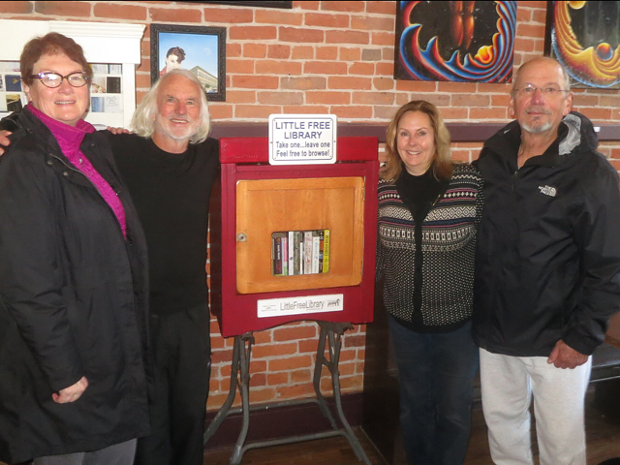 If you’re fond of walking down random byways, chances are you’ve stopped to take a second look at one of these charming little boxes, which look a bit like glass-fronted bird houses, perched above fences and bearing plaques with their official charter numbers. Little Free Libraries, a nonprofit organization that started in Wisconsin, sells these tiny little houses for neighborhood book exchanges pre-built on their website. Crafty folks can also build their own. The book exchanges offer neighbors the opportunity to take and leave books. Unsurprisingly, Humboldt County has taken to the idea in a big way. For this season of giving, we interviewed some of the folks who started their own Little Free Libraries about why they decided to set up these kiosks, and what the experience has been like.

“My little free library is right in the front yard next to the sidewalk. I heard about them online and told my three children that’s what I wanted for Christmas two years ago. My son put it up; it has been very popular. I’m surprised there aren’t more around.”

According to www.littlefreelibrary.org, Carignon’s library is one of two in McKinleyville. It’s right next to the Hammond Trail, and Carignon says it’s very popular with local children and hikers. “People who are on their bicycles sometimes turn around," she says. Although the library is just in front of her house, nobody has ever bothered her at home. People do, however, often stop her in the grocery store and thank her, she says.

“I always need more children’s books,” she says. "I try to go out three times a week. People give me books to put in and I go to library book sales. It’s just fun to see what people like. Hikers mostly like science fiction, I noticed.”

If you are looking for a late Christmas or Hanukkah gift, take note. Carignon says the Little Free Library, which came pre-assembled, was one of her “all-time best gifts” from her children.

“I get this magazine called The Family Handyman, and on the cover they had plans for a little free library. They had instructions on how to build it. That was basically it.”

Suiker, who built his library out of plywood and pine with a roof of corrugated tin, says he has had several conversations with library patrons since he put it up several months ago.

“My daughter found some of them around town and she really liked them,” says the local lawyer and former candidate for District Attorney. “She wanted to drive around and drop off books, then decided to start our own.”

Firpo’s father built the house partially out of salvaged redwood, with a roofline to match that of their house.
“We get a lot of traffic,” says Firpo. “We have a notebook where people leave us notes. People say thank you, write requests. We keep dog biscuits because a lot of people walk by with their dogs. The biggest demands are children’s books, and the hardest books to keep in it are children’s books.”

Firpo’s daughter, who is 17, also labels the books so they look like library books, and checks it daily.

“We have 67 campsites on the fairgrounds,” says Lisa Hindley, office manager for the Ferndale Fairgrounds. “We get a lot of people in here, a lot of the RVers and campers like to read. It’s actually been pretty successful."

Little Free Library #15424 was previously located in the entrance alcove of the Redwood Curtain Theatre on Snug Alley. After a long run with books coming and going regularly, the entire stock began to disappear during the wee hours of the night, hence the relocation to a safer home.

Barry Evans, who is currently in warmer climes along with his wife and co-contributor Louisa Rogers, might want you to check out his 2009 article about the science of the Christmas story as well as checking out some free books.