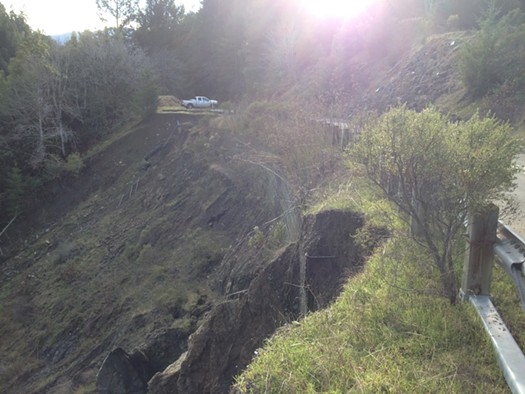 Still around $200 million in the hole for deferred maintenance on county roads and other infrastructure projects, the Humboldt County Department of Public Works is looking for alternate measures to fund road repair in 2017. Those measures include emergency funding from the state and the possible passage of a state transportation bill that could raise prices at the pump anywhere from 17 cents per gallon for gasoline and 30 cents per gallon for diesel.

"It's hard to convince people to pay any more for anything," acknowledged Tom Mattson, director of public works. "But that same bill will give Humboldt an additional $10 million. That would more than double my gas tax money."

The transportation reform and funding proposal, which was introduced by Sen. Jim Beall and Assemblymember Jim Frazier (D-Oakley) in August, is slated for discussion in Sacramento for early 2017. Along with the hefty hike in gas tax, consumers could see a $38 per year increase to their vehicle registration fees, according to information on the League of Cities' website.

In April, the California Board of Equalization voted to lower the state’s excise tax on gas purchases, which cut deep into the state's transportation fund and set back planned repairs. In November, Humboldt County taxpayers voted down local Measure U, a proposed 20-year, half-cent special sales tax that would have brought in an estimated $10 million per year to repair roads. Without that money, Mattson says a reform of the current gas tax is one of the only tools in the county's financial toolbox to fix those potholes and slip-outs. But consumers and local businesses are already dreading the potential pinch.

"It's going to be tough," says Ed Lewis of Lewis Logging, who said he dreaded trying to bid for jobs to local sawmills with the additional transportation costs. "The timber industry has been in a terrible way since '08; this is just another nail in our coffin. We have very few sawmills to sell our wood to. I’m in a bad spot."

The Humboldt County Board of Supervisors proclaimed a state of emergency in a special meeting on Dec. 21 after storms caused an estimated $2.89 million in damage to local roads. The proclamation might mean some additional funding from the state. Mattson said state representatives were in the field on Wednesday, examining a slip-out close to Honeydew and Shelter Cove.

The section of Wilder Ridge that might be fixed thanks to disaster funding has been sliding out for several years.

The next step, says Mattson, is to "meet and argue about what the proper repairs are going to be, then take it to the governor."

Public Works will also reapply for Measure Z funding. The department received $1.66 million from the special sales tax for the 2015-2016 fiscal year, an amount that is fully 16.6 percent of total deferred maintenance the county accrues each year, and a tiny portion of the total deferred maintenance on county roads. The county currently does have several bridge projects fully funded, including one in Honeydew and another near Holmes.