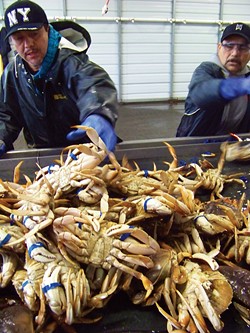 A week's worth of negotiations have failed to break the stalemate between Humboldt Dungeness crab fishermen and the Pacific Group, which locally owns Pacific Choice Seafood. Last week, Pacific Group announced it was lowering its buying price for crab from $3 per pound to $2.75.

Fishermen in District 7 — which stretches south from Humboldt Bay’s North Jetty to Point Arena in Mendocino —refused to accept the price and went on strike, delaying the start of the season. According to Ken Bates, vice president of the Humboldt Fishermen’s Marketing Association, fishermen in other ports from Westport, Washington, to Bodega Bay, California, have also tied up their vessels in solidarity. Boats in San Francisco and Half Moon Bay, which are currently receiving the full price of $3 a pound, will also tie up at midnight tonight.

"Pacific Group took advantage of a situation," said Bates in a phone interview this afternoon. "Traditionally the prices don’t go down as the season progresses."

Bates added that last year's chaotic season, which was delayed due to a domoic acid scare, further complicates the picture.

In a press release, Bates said no movement was expected until after the New Year's holiday. A call to the Pacific Group's media contact was not returned.

Roger Rowland, a local crab fisherman, said the delay has been especially hard on smaller local vessels that don't fish out of other ports.

"Everybody who has not gone fishing deserves the same price," Rowland said. "It's not bad with us; the other guys who have not got to fish are struggling. Some guys don't get unemployment. It's not easy on the families, not easy to wait."

Rowland, whose vessel left to fish in ports that opened earlier this year, said they plan to stay tied up over the holiday. He added that while many of the crabs they have caught this year are large, the numbers have dropped dramatically since they first dropped their pots in November, from 3,000-4,000 pounds a load to 2,000.

Diminished hauls and a continued strike may mean another difficult year for commercial fishermen who were hoping to rebound after last year's poor season.

From the Humboldt Fishermen's Marketing Association’s Board of Directors:

Dungeness crab fishermen continue to tie up in support of the $3.00/per pound price for Dungeness crabs in California, Oregon and Washington State. The $3.00 price had been being paid for all crab deliveries in California and Southern Oregon since November 15, 2016. On or about December 22, 2016, Pacific Group announced their intention to reduce the ex-vessel for crabs by .25 cents to $2.75 effective Monday December 26, 2016. District 7 fishermen refused the lower price drop and tied up their boats.

As of today, fishermen from Westport, WA to Bodega Bay, CA are on strike. In the ports of San Francisco and Half Moon Bay, those boats will tie up at mid-night tonight. They are presently fishing for $3.00/pound or more for their crabs.

No action or progress is expected over the New Year’s holiday. Small and medium sized fish companies are anxious to resume buying crabs at $3.00, but are unwilling to risk buying crabs if Pacific Group is successful in lowering the price.