Return of the Great Gray Owl

Prior to last winter, it had been 30 years since the last sighting of a great gray owl locally (both times in Redwood National Park). And now we have another one here to make it two winters in a row. Seeing the owl was quite a gift in between continual snow/rain showers on Monday, Jan. 2 near Alder Grove Road in Arcata. 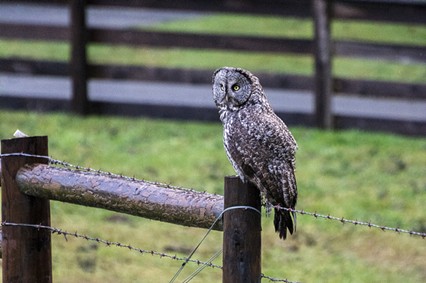 Members of a family living nearby said the owl appeared in their back yard just after Christmas, feeding on voles and gophers on their property. They reported their grade-school age son has been collecting video and photos and and intends to do a project about the owl for an upcoming science fair. 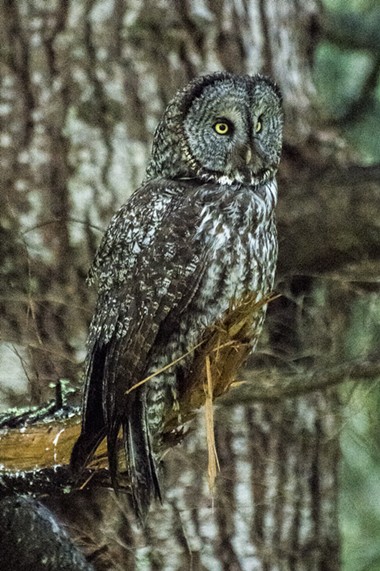 Owl-watching advice for this location: Unlike the easy access and parking availability in Redwood National Park, this is all private property on both sides of the narrow road with limited parking. This owl appeared more sensitive to the presence of humans and noise than the one in the park last year. Get more advice from local bird-watching experts here. 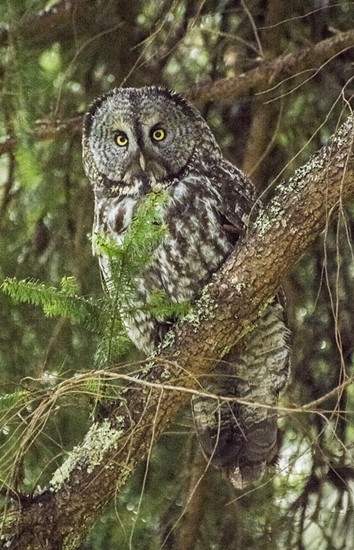 I watched the great gray owl (Strix nebulosa) move frequently from perches on nearby fences and on tree branches, listening for distant voles to reveal themselves. The world's largest owl (by length), it has remarkable hearing partly due to it having the largest facial disc of any raptor. Also called Phantom of the North, cinereous owl, spectral owl, Lapland owl, spruce owl, bearded owl and sooty owl, this is only the fifth sighting on record locally. Fewer than 100 are found in the Sierra Nevada (the southernmost population of the species' range) and they are listed Endangered under California's Endangered Species Act.