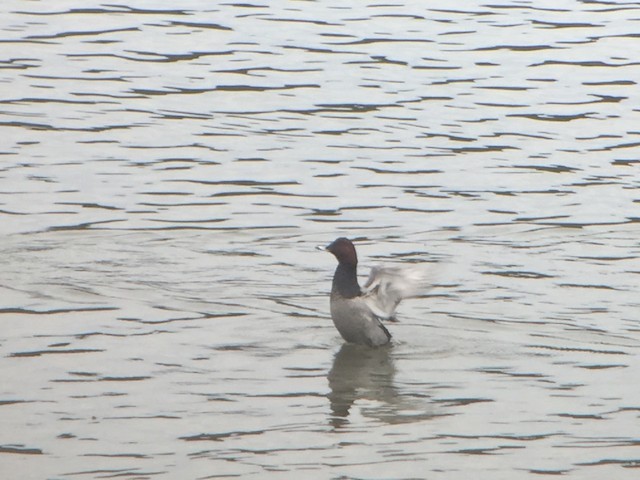 Humboldt County's latest visiting celebrity has a red head, greyish back and pale saddle on its bill. Birders from across the country have been visiting to snap pictures of the common pochard, first spotted Dec. 20 in Freshwater Lagoon, near Orick.

The pochard, which is native to Europe and Asia, rarely makes its way to our continent. This is only the fourth time one has been spotted in the lower 48 states, according to local birder and tour leader Rob Fowler.

"All these sightings have occurred in California, the last one was in 1992 or 1993," said Fowler, referring to a spotting of the pochard in San Bernadino County, where birders saw a member of the species return over several winters. Very few people actually saw and recorded the duck at that time, but this pochard appears settled into its visit, mixing and mingling with other species at the lagoon, to the delight of birders who have flown in from as far away as Boston and Chicago.

Fowler calls it a "pretty good deal," adding that it doesn't appear as though the extra attention is disturbing the common pochard, which can be seen from the Old State Highway.

"There has been some concern expressed about hunters potentially taking the bird," said Fowler, echoing the fears of some birders voiced on social media. "Either accidentally or potentially hunters might come up specifically looking for the bird. Hunting is only allowed on the east side of the lagoon so I don’t really think it would be shot there, with the amount of other ducks it’s hanging out with."

Fowler said he and his clients have enjoyed looking for the bird, which is in Humboldt County for the first time.

"It’s kind of funny how these chases go sometimes," he said. "Seeing something that had to fly across the whole Pacific to get here. It’s always exciting to share these sightings with people."