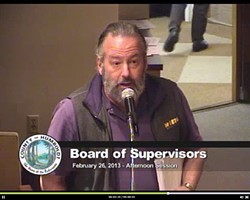 Mitchell, a former McKinleyville school board member and current member of the county’s Assessment Appeals Board, addressed the supervisors, saying he would “listen to everyone who comes to the lectern” and do his best “to forge consensus opinions.”

He also pledged “to play well with others” and said that while it is important to support infrastructure and job growth, the county’s natural environment needs to be safeguarded.

Ulansey, who was described as a “divisive” figure by some public speakers, was among the 16 candidates under consideration for the position. A recommendation to reappoint the Kneeland resident — brought forward Jan. 17 by First District Supervisor Rex Bohn — was pushed back to this week, with the board majority saying they wanted to look at other nominees.

Second District Supervisor Estelle Fennell, who worked with Ulansey at the Humboldt Coalition for Property Rights before being elected, commented today that this was a very difficult decision for her.

She noted the work Ulansey has done on the commission and as the founder of HumCPR, saying he was qualified to continue in the role and has been a strong advocate for rural residents and timber land property owners.

“For that he has my great appreciation,” Fennell said.

She also spoke out against many of the public comments made at the last meeting and in letters and emails to the board, calling them “fake news” and “personal attacks.”

Those comments included claims that Ulansey’s donations to the political campaigns of several supervisors amounted to conflicts of interest.

“Anyone who knows me, knows I cannot be bought,” Fennell said.

Bohn and Fourth District Supervisor Virginia Bass also recognized Ulansey as a commissioner who did his homework and asked the tough questions while expressing similar sentiments about some of the correspondence they received, which they said included statements like, “We’re going to be watching you.”

“It does feel threatening and it’s not a good feeling, whichever side it’s coming from,” Bass said.

She noted that there is a long history of commissioners donating to political campaigns — all of which are public record. Bass went on to say she was “looking for a consensus candidate as well” and representation of the McKinleyville area has been lacking on the commission.

Fifth District Supervisor Ryan Sundberg, the catalyst for examining other candidates for the planning commission post whose constituency includes the McKinleyville area, did not comment other than to put forward his top two choices: Mitchell and Big Lagoon Rancheria General Manager Virgil Moorehead.

Wilson put his support behind Nicole Sager, the Yurok Tribe's assistant planning director, saying the commission needed more diversity. Though he voted against Mitchell's appointment, he said he has nothing against him personally and looks forward to working with him.