Residents of the Wilder Ridge/Honeydew area, a remote region of Humboldt County on the Lost Coast, have taken to social media over the last few months to post post pictures of their failing roads, including the extremely rough ride through Humboldt Redwoods State Park, where bathtub-size potholes have bent frames and popped tires. That road is scheduled to be fixed in mid-summer, due to some accounting magic on the part of California State Parks, but Wilder Ridge Road, which connects Wilder Ridge with the nearest store, school and post office, faces greater uncertainty. A portion of the road that has been threatening to slide for several years, at Landergen Road just south of Honeydew, has been closed indefinitely.

"It is buckled all across and sunk about 16 inches and Landergen has a drop off about 3 feet right above it," said Teresa Davey, a Wilder Ridge resident who was called to pick up her young daughter from school before the road was closed entirely. The Journal interviewed Davey almost exactly a year ago, when we investigated the roughly $200 million in deferred maintenance the county has accrued for road repair. At that time, Davey said she would probably have to park a car on either side of the slip and hike with her daughter across the slide should it fall out.

Things have not improved since then, for the road or for Davey, who said she wishes the county had fixed the failing section of road when there was better weather.

"Now they were out here in the pouring down rain trying to figure out what to do," said Davey, who is working with the school's principal, who also lives on Wilder Ridge, to ferry kids across the slide so they can attend school. The only other alternate route for children attending Honeydew Elementary is via Garberville and U.S. Highway 101, 81 additional miles that would take an additional three to four hours to traverse.

But Tom Mattson, the director of Public Works, said funding has yet to come through to fix that or other rural roads. In previous interviews, Mattson has said there is not enough money reaching his department via gas tax to make needed infrastructure repairs. Measure U, a half-cent sales tax that would have earmarked money for road repair, was rejected by Humboldt County voters in November.

Reached by email this afternoon, Mattson said he has not yet received word if emergency funding from the state will be coming through to fix the Wilder Ridge slide. The county had applied for this funding in January after making a disaster declaration due to the impact of heavy winter rains.

"No funding has been made available yet, although some 30 California counties have declared emergencies. Until we know there is funding to fix it we cannot give an estimated timeline on when it will be fixed," said Mattson, adding that his department has made a request to the Bureau of Land Management to see if an access road owned by that agency can be made available. 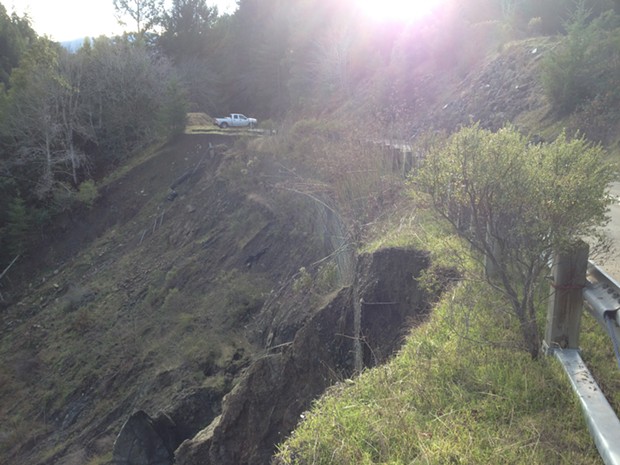