Board of Supervisors Talks 'Band Aid' Funding for Roads 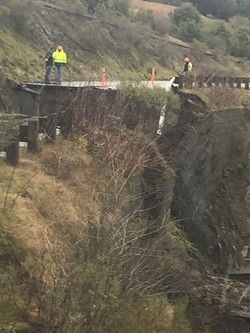 The Humboldt County Board of Supervisors voted unanimously yesterday to direct $575,000 in leftover Measure Z money to the county public works department rather than rolling it over into the next fiscal year.

The decision came after a long discussion among the supervisors and public comment by a resident of the Petrolia area, who shared concerns from residents that the Wildcat Road from Petrolia would soon be unnavigable due to potholes and slides.

The remote Mattole Valley is only one of many rural areas that have been impacted by winter storms that have compounded around $200 million worth of deferred maintenance.

Supervisor Ryan Sundberg, who seconded the motion to give the money to public works, said he had received quite a few emails about road issues in his district but it was important for the public to have “realistic expectations” about how the money would be spent.

“We have to figure out how to make that fair between all five districts,” said Sundberg.

Rex Bohn, who drove out to Honeydew on Saturday to visit a collapsed section of Wilder Ridge Road that is preventing residents from accessing the nearest post office, school and store, said many of his constituents would like to see more funding for roads, which he said are a public safety issue. At least seven schoolchildren, as well as a teacher and teacher’s aide, have had their school schedule disrupted by the failed road, which has been sliding out for several years and finally collapsed last Friday. Wilder Ridge residents currently have only one access route – through Redway – and emergency services have been interrupted by the road failure. Bohn praised the public works department and Bureau of Land Management for working through the weekend and acting proactively to find a solution.

Thomas Mattson, director of public works, said in an email that a temporary detour, the construction of which will take a week, is in the works. It would require access agreements with BLM and a private property owner.

“It is not the permanent fix but should be operational soon,” said Mattson.

In the meantime, other roads continue to experience intermittent closures due to flooding. Estelle Fennell, who said her “main concern” for the extra money is that it go into roads, cautioned that the public should be aware that the fixes were like “using Band-Aids.”

“There are not going to be any amazing transformations,” she said. The county currently accrues about $10 million in deferred maintenance every year, and Mattson has said the current public works budget is inadequate to address ongoing issues. In the 2016-17 fiscal year, roughly 13 percent of the
$12 million Measure Z funds went toward road maintenance.