Attack of the English Ivy 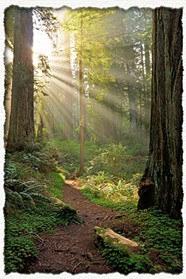 A number of conservation groups, government branches and a logging company petitioned for a ban of selling English Ivy in California. Over 20 organizations, including the Environmental Protection Information Center and Green Diamond Resource Co., led a petition to designate English Ivy as a noxious plant.

Tom Wheeler, Executive Director of Environmental Protection Information Center, said the Ivy is harmful to North Coast forests. The sale is already prohibited in Oregon and Washington, and it’s time for California to join their North Coast neighbors.


“English Ivy is a very destructive and invasive species on the North Coast,” Wheeler said. “It’s a direct threat to our most iconic species [the Redwood] but also other vegetation as well.”


English Ivy is not a native species, it was brought over from European settlers as ornamental plant, but has since spread throughout public lands. Because the plant is not indigenous to the North Coast, it out competes the plants like Salal and Huckleberries, which are indigenous to this area.

Wheeler said if the Ivy contacts trees it spreads and climbs all over the branches and canopies of trees. This spread Ivy adds a greater surface area to Redwoods which puts a lot more stress on them. Besides Redwoods and vegetation, English Ivy is also harmful to the Northern Spotted Owl because it covers the ground and makes it hard for the owl to hunt for food.


“Ivy is not good,” Wheeler said. “it’s somewhat pretty, but it’s silly that this species is not prohibited to sell in California.”


English Ivy made its way onto the California Department of Fish and Wildlife’s “Please don’t plant these species list.” The list also has eight other plants, including iceplant and big periwinkle.


Wheeler said not a lot of English Ivy plants are sold in local communities so the petition won’t be a huge economic hit.


According to the Fish and Wildlife’s website, English Ivy can escape gardens and spread rapidly by growth and seed distribution. The Ivy grows very well in shaded areas and can completely cover the ground blocking any hopes for indigenous vegetation and dominating tree canopies.


The department offers an alternative plant to use instead of English Ivy. Alumroot is a native plant that is not a vine and would not climb as well as English Ivy, but it offers leaves year round and grows in partly shaded areas.


The petition will make its way to the Department of Food and Agriculture, which will either accept the petition — banning English Ivy from sale and labeling it as noxious - or the petition will be denied and the sale of the plant allowed to continue.


“I am hopeful, because we have such a broad and diverse group of petitioners,” Wheeler said.