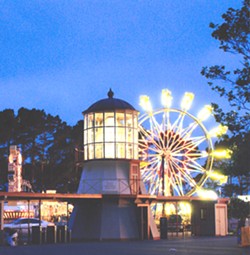 Humboldt County Fair Association General Manager Richard Conway issued a statement today in response to questions about a legal settlement the association paid to the Ferndale Enterprise, covered in this week's Journal.

In his statement, Conway blames the HCFA's failure last April to provide Titus with a document requested under the California Public Records Act on an "oversight" made because the association had already sent a "multitude" of other documents. Conway says once the error was realized, the association immediately provided Titus with the documents. He accuses Titus of intending to "inflict hardship upon the fair" by suing the HCFA despite having received the documents in question.

Titus and her lawyer, Paul Nicholas Boylan, dispute this interpretation of events. Titus says she asked for the fair's 2015 Statement of Operations twice before stating that she would "seek judicial remedy."


"The moment they were served with the suit they turned over the documents," says Titus.

Conway also says multiple good faith offers were made by the fair before settling the dispute, which ended with the association paying out $68,000 from its own general fund this month to Boylan and the association's own lawyers.

"If HCFA provided prompt access to public records — which the law requires them to do — then they would have paid nothing to me or their defense attorney," he wrote in an email to the Journal. "The reason my fees went up is because they refused to settle on the terms Ms. Titus demanded — the exact same terms they eventually accepted."

The terms he's referring to is the agreement on behalf of the fair to comply with CPRA guidelines, which mandate public entities turn over public documents within a certain time period. The fair association's status as a public entity has been a matter of courtroom debate. Because it manages public property and uses public funds, Titus argues, it should be subject to public disclosure laws. The Tituses reached a $150,000 settlement with the association in a First Amendment and wrongful termination suit in January of 2016 after alleging the board had fired Titus's husband Stuart because he refused to suppress his wife's coverage of the fair board.

Conway alleges that Titus is incapable of covering the HCFA objectively.

"There is a huge conflict of interest by Mrs. Titus (as a publisher of a community paper) during her four year campaign to destabilize the fair as retribution [for] her husband’s non-renewal as general manager," he says in his statement.

"Reporting on the finances of the fair, especially when they decide to go underground is more important than ever," she says, referring to the HCFA's decision to restructure as a nonprofit in 2015, a move that shielded it from allowing the media into its board meetings.

Titus has expressed concern about the fair's future revenues, especially in light of its recent decision to move the fair to Labor Day weekend, when school will be in session.

But in his press release, Conway says the fair's revenue is robust and will not be impacted by the settlement.


From the Humboldt County Fair Association:

Fair Settlement Not to Hinder 2017 Fair

In regard to the recent settlement with the Ferndale Enterprise the staff and board of the Humboldt County Fair admit that an oversight was made to providing the Enterprise with a requested public record document because it was mistakenly thought to have been one of a multitude already sent. Due to the volume of document requests made by the Enterprise it is understandable that one could be missed. Once the Fair realized this oversight the paper was immediately provided with the document. It is not the intent of the Fair to withhold any requested documents from the Enterprise or anyone else. Still the Enterprise continued the lawsuit showing the publishers (Mrs Titus) true intent to inflict hardship upon the Fair, not the receipt of the document. In the course of the settlement discussions multiple good faith offers were made by the Fair but ignored. Each time the Enterprise’s attorney raised the settlement amount. If the Fair had not agreed to the $21,000 settlement the amount could have skyrocketed.

There is a huge conflict of interest by Mrs Titus (as a publisher of a community paper) during her four year campaign to destabilize the Fair as retribution to her husband’s non-renewal as general manager.

In spite of the negative press and distractions of this litigation, the Fair board and staff is proud to report over the past four years attendance is up 20%, sponsorships have doubled, food concessions are up 100% and the Junior Livestock Auction reached a new pinnacle in 2016 generating over $700,000 for the first time! This has enabled the Fair to reinvest into facility repairs and maintenance. The commitment to the ongoing heritage of horse racing at Humboldt Co. Fair continues through 2017 as well. Revenue from interim periods at the Fairgrounds are up too. Early planning stages include a continuation of the partnership with the office of education, entertainment at a continued new level of excellence and all the other things that make our county fair a wonderful experience to participating 4H and FFA kids, exhibitors, attending families, seniors and the whole community at large.

Fair board members are volunteers that serve the community never receiving any compensation (and very little credit) for their work and in many cases they make major donations as sponsors as well. This is quite a contrast to Mrs Titus’ actions to undermine the reputation and future solvency of the Fair that paid her husband for 22 years and now provides her family with a pension.

All those affiliated with the Fair deeply appreciate all the support and sponsorships the community continues to generate as we work together to insure the ongoing cultural success and economic viability of the Humboldt County Fair! Thank You!