If you read a Breitbart News story earlier this month about the Klamath River, you’d be excused for thinking those of us who live along the river are doomed to die in watery graves as soon as the largest dam removal project in U.S. history is complete.

You’d also be very wrong, both for taking a Breitbart story at face value and for thinking dam removal will have any substantial impact on flooding along the Klamath River.

The basic premise of the Breitbart story is that the planned removal of four old hydroelectric dams on the Klamath — slated to be completed by 2020 — would make the river more prone to catastrophic flooding. 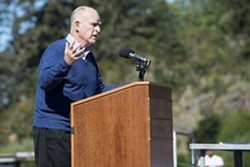 Consider the story’s first sentence: “While America was distracted as 500,000 cubic feet per second of water flooded over the Oroville Dam, the Klamath River flooded in what could have been a catastrophe if Gov. Jerry Brown had already completed his funded plan to tear down four of its dams.”

There are a number of problems with this sentence. First of all, the plan isn’t Brown’s — it was an accord reached primarily between a private company, Pacificorp, the federal government, the states of Oregon and California and a number of local tribes. While Brown and his administration were certainly supportive, no one involved would point to him as the driving force behind the agreement, which stemmed from a pact reached in 2010 by a host of Klamath stakeholders, including tribes, ranchers and farmers. (That deal crumbled when it failed to get congressional approval.) But the main problem with this sentence is that none of the four dams slated for removal does anything substantial when it comes to flood control — it’s not what they were built for, but we’ll get back to that later.

The story then notes — inaccurately — that the Klamath River surpassed flood stage on Feb. 10 (it actually happened Feb. 9, but that’s probably an honest mistake) before receding in the following days. The story then states that additional rain in the forecast will “probably cause another flood.” It did not, according to National Weather Service meteorologist Reginald Kennedy.

Speaking to the Journal, Kennedy said the river has actually continued to recede since reaching its high point of 41 feet, recorded just upriver from the Klamath River Bridge on U.S. Highway 101. But the larger problems begin in the next paragraph, when Brietbart reporter Chriss W. Street references that the plan to “tear down four sustainable hydroelectric dams” comes because Pacificorp is unable to “modernize the structures due to the Brown administration and environmentalist lawsuits.”

In fact, the modernization requirements come from federal law and from a federal authority — the Federal Energy Regulation Commission — and the dams are, in fact, unsustainable, according to Pacificorp, which has determined it isn’t in the company’s financial best interest to continue operating them because “modernizing” them would cost more than removing them and the dams simply are no longer a cost-effective way to produce power.

Street then notes, accurately, that North Coast counties have always been susceptible to flooding before once again straying from the truth. “That is why the Klamath River Project, built in the early 20th century, featured a system of seven dams and a network of sustainable hydroelectric power stations to slow the raging flood waters,” Street writes in what can only be considered a pretty substantial distortion. Now, to be fair, it’s unclear whether Street is referencing the Klamath Project or the Klamath River Hydroelectric Project but either way he’s wrong as neither was built with the primary intention of controlling flood waters.

The Klamath Project — featuring seven dams, a series of canals and pumping stations — was designed to divert water from the river into an irrigation system that allowed for the transformation of hundreds of thousands of acres of rangeland into farmland. The Klamath River Hydroelectric Project, meanwhile, included eight dams — including the four slated for removal — and, as its name attests, was aimed to providing cheap hydroelectric power to farmers and ranchers in the area.

Now, Link River Dam, built in 1921 in Klamath Falls, Oregon, and a central piece of both projects, does have a deep reservoir with a capacity to hold 873,000 acre feet of water, but it isn’t one of the dams currently slated for removal. Those dams — Iron Gate, Copco 1, Copco 2 and John C. Boyle — have virtually no flexible storage capacity.

Some dams are used quite effectively for flood control. These are dams with reservoirs capable of storing large amounts of water that allow people to control river flows by letting the reservoir fill during extreme weather events and then letting additional water downriver when the storm subsides. Shasta Dam on the Sacramento River, for example, has a reservoir that holds up to 4.5 million acre feet of water. Closer to home, Trinity Dam on Trinity River has a reservoir — Trinity Lake — with the capacity to hold more than 2.4 million acre feet of water.

In contrast, the reservoirs attached to the four Klamath River dams slated for removal have a flexible storage capacity of about 11,000 acre feet, according to Karuk Tribe Natural Resources Policy Advocate Craig Tucker, who’s been working on Klamath dam issues for decades.

“The fact is the Klamath dams don’t really do much for flood control,” Tucker said. “They don’t.”

Bob Gravely, a spokesman for Pacificorp, agreed. “In general, the reservoirs for the Klamath dams are not really there as flood control,” he said. “There’s some minimal ability to (affect flows), but that’s not what they’re there for. If there was any type of serious flood event, you wouldn’t be able to stop that.”

Interestingly, Tucker pointed out that the original Klamath Basin Restoration Agreement — the one scuttled by congressional inaction — would have actually increased the ability for flood control on the river, as it provided for the restoration and expansion of upper Klamath Lake and would have added almost 100,000 acre feet of water storage capacity.

That gets no mention in Street’s piece, which somewhat comically goes on to talk about the devastation caused by flooding in 1955 and 1964, pointing out that the ’55 flood caused 74 deaths and $200 million in property damage in all of California. He then moves on to the 1964 flood, which did devastate swaths of the North Coast, including Klamath, knocking out the former U.S. Highway 101 bridge over the river. However, the flood came after all of the Klamath dams were in place, a fact that goes unmentioned in Street’s story.

Street links devastation from the flooding to then Gov. Pat Brown’s loss in the 1966 governor’s race to Ronald Reagan, saying Brown had provided very little in the way of flood control infrastructure on the North Coast, which “tarnished” his reputation. This is a stretch, but probably the subject of a different article.

Street wraps his piece up with a doozy of a kicker — one that both overstates the facts on the ground and offers a fictional hypothetical:

“The un-noticed Klamath River, even with its dam system still in place, is expected to flood and potentially cause serious damage to the North Coast when the rains hit. If four of the seven dams were already torn down, the flood and destruction from the Klamath River would likely have been epic.”

Again, the Klamath was never expected to flood to the point of causing serious damage at any point this month. And, looking back, the only inconvenience even caused by flooding along the Klamath this month came from flooding tributaries, which necessitated a few road closures, according to Kennedy.

In short, Breitbart’s coverage of the Klamath is fatally flawed — so much so it’s fair to wonder what the motive is, especially given the fringe news organization’s ties with the new administration occupying the White House. Could this be the first sign that President Donald Trump is thinking about trying to scuttle the new dam removal deal, which would be the biggest restoration project in U.S. history?

If so, Tucker said Trump would seemingly be working against all he stands for.

But maybe we’re just reading too much into this. After all, the story came from a news organization that has run headlines like: “Planned Parenthood’s Body Count Under Cecile Richards is up to Half a Holocaust,” “Birth Control Makes Women Unattractive and Crazy,” and “Gay Rights Have Made Us Dumber, it’s Time to Get Back in the Closet.” So, yeah. But it also must be pointed out that just Friday Breitbart had a seat at a press briefing with White House Press Secretary Sean Spicer while CNN and the New York Times were barred from attending and labeled as "fake news."

Editor's note: This story was corrected from a previous version that incorrectly listed Craig Tucker's job title. The Journal regrets the error.