It was sunny when I went to get my hiking boots but by the time I got dressed and out the door, it was 49 degrees and drizzling. I went anyway. The path down to the river was dark, the only sounds were the gentle “pok, pok” of water dripping from branches. The burning in my fingertips told me it was too cold for insects to be servicing the barely open Indian plum flowers. Down on the flood scrubbed river bar were scant traces of life. 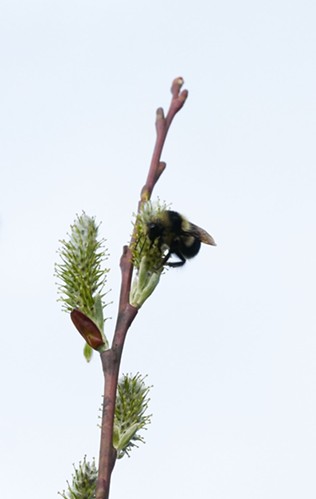 Near the end of the trail, out in the open, something buzzed furiously around me three or four times then headed off. From the quick glimpse I got I knew it was a bumblebee. It headed for a big pussy-willow about 50 meters upstream. Against the subdued damp earth tones of the river bank, dark overcast sky and somber evergreens, the yellow green of their catkins stood in sharp contrast, beckoning nectar and pollen feeders.

It was busy despite the cold. Insects were there in numbers. I started taking pictures and realized except for a couple of tiny bees they were all flies of one sort or another. Members of the order Diptera they are unique among the orders of insects in having only two wings instead of four. In my opinion it is the most diverse order. They fill the same niches as most of the other orders from parasites and hunters to, in this case, nectar feeders, which provide pollination services to a great many flowering plants. My college entomology professor did his thesis on pollinators of the wildflower Clarkia. To everyone's surprise, the majority of insects to visit the flowers he monitored were various species of flies. It may be true for willows as well. 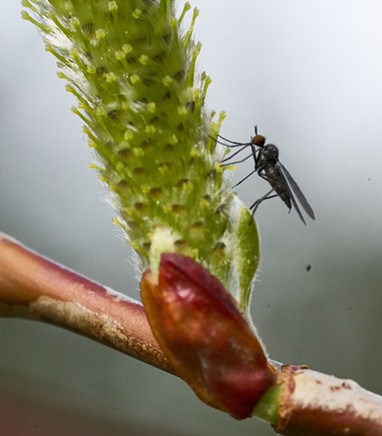