Attorney to County: If New Public Defender is Qualified, Prove it or Face Lawsuit

A local attorney is threatening legal action if the county of Humboldt doesn’t remove newly hired Public Defender David Marcus from his post or prove that he’s qualified to hold it.

After a controversial hiring process, the Board of Supervisors appointed Marcus to the post Feb. 7 and his first day on the job was Monday. But on Tuesday, local attorney Patrik Griego, of the firm Janssen and Malloy, hand delivered a letter to county counsel’s office alerting it to the fact that Marcus’ hire may have violated California Government Code Section 27701, which lays out the minimum qualifications for a public defender in the state.

The Journal emailed County Counsel Jeff Blanck about the code section as it relates to Marcus’ hire on Friday afternoon and then followed up with phone calls Friday, Monday and Tuesday but has so far received no response.

The one-sentence code section reads as follows: “A person is not eligible to the office of public defender unless he has been a practicing attorney in all of the courts of the state for at least the year preceding the date of his election or appointment.”

This appears to be a more stringent requirement than that contained in the Humboldt County code, which simply requires that the attorney be “licensed to practice in all the courts” of the state for at least one year preceding the appointment. If the two codes are in conflict, the state code would prevail.

The distinction between the two codes may prove critical in Marcus’ case as he apparently hasn’t practiced criminal law since 2012 and it’s unclear if he’s even set foot in a California courtroom since leaving his post as Lassen County’s public defender in 2011. As we reported Feb. 21, it’s hard to pin down exactly what Marcus has been doing since his controversial tenure in Lassen came to an end.

The resume he submitted to the county indicates that he’s spent the last five years working for the firm Cella Lange and Cella as a contract attorney, doing transactional real estate and property loss consulting. But the Walnut Creek firm has no website and doesn’t seem to come up in any news reports or legal filings on the web. Further, the firm isn’t a member of the Contra Costa Bar Association and the association’s executive director indicated she’d never even heard of it. (Read past coverage here.) 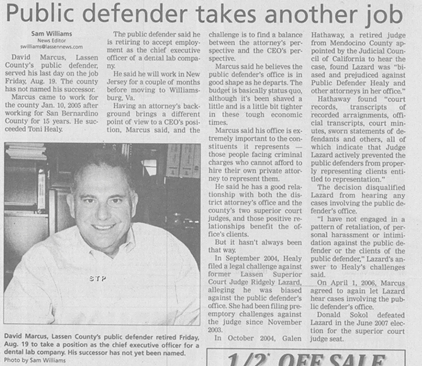 According to an August 2011 story in the Lassen County Times, Marcus left the county’s employment to become the CEO of a dental lab company in Virginia but that post doesn’t appear on the resume he submitted to the county. Further, in a 2012 filing for Chapter 7 bankruptcy protection, in which Marcus reported having $485,000 in assets compared to $965,000 in debt, Marcus indicated he was receiving unemployment pay and had been laid off from his job in June of 2012. It’s unclear what job he was referring to, especially as Marcus reportedly told the Times-Standard last month that he'd spent the prior five years working as the CEO of a dental company and a contract attorney on the East Coast.

Further muddying the waters is the fact that while it’s customary for lawyers to provide the California State Bar with their firms’ addresses and phone numbers for their online profiles, Marcus’ listing includes his home address in Jacksonville, Florida, and a phone number that connects to an answering machine indicating callers have reached the “Marcus family.” Numerous Journal messages left there went unreturned, as did one left at the public defender's office this morning.

“It is quite clear from the code and the legislative history that this requires the board to hire an attorney who has appeared in criminal courts for the year prior to his hire. Simply advising civil clients from another state would be grossly insufficient and fails to protect the citizens of our community.” tweet this
In his letter, Griego indicates there are questions regarding whether Marcus is legally qualified to hold his new position.

“A review of the state bar website indicates that Mr. Marcus was not even living in California for the year prior to his hire and was therefore not practicing in all the courts of the state,” Griego wrote. “It is quite clear from the code and the legislative history that this requires the board to hire an attorney who has appeared in criminal courts for the year prior to his hire. Simply advising civil clients from another state would be grossly insufficient and fails to protect the citizens of our community.”

Included with Griego’s letter is a draft writ of mandate which would ask a superior court judge to intercede and block the appointment and, if successful, would potentially make the county liable for Griego’s fees.

“Please contact me this week if you are interested in trying to resolve the matter without potentially unnecessary litigation,” Griego concludes, adding in the draft writ that he believes allowing Marcus to continue in the post would deprive public defender clients of their Constitutional right to equal protection.

Griego is a widely respected local attorney who worked in the public defender’s office before venturing out into private practice, where in 2010 he was part of a team that obtained the largest jury verdict in Humboldt County history. His resume includes a host of honors, including being named the 2011 Public Justice National Trial Lawyer of the Year and the Lawyer of the Year in 2009 by California Lawyer magazine. 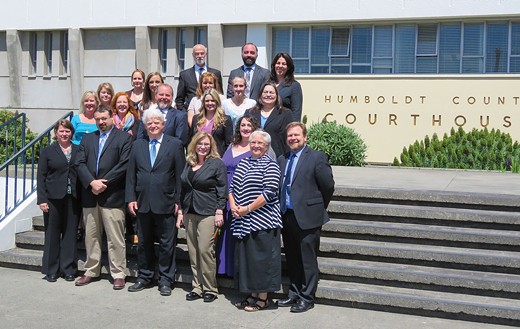 The crux of whether Marcus is in fact eligible to hold the post of public defender seems to rest on two things: What exactly Marcus’ legal work over the last year has consisted of and the legal definition of “a practicing attorney” in the state code.

Despite extensive efforts, we’ve been unable to find much of anything to indicate the extent of Marcus’ legal work since he left Lassen County so we’ll proceed to the code question.

In Merchants, the court ruled as follows: “As the term is generally understood, the practice of law is the doing or performing of services in a court of justice, in any matter depending therein, throughout its various stages, and in conformity with the adopted rules of procedure. But in a larger sense it includes legal advice and counsel, and the preparation of legal instruments and contracts by which legal rights are secured although such matter may or may not be pending in a court.”

The second part seems to lend some wiggle room in Marcus’ case, but the government code seems to explicitly squash that by including the phrase “in all of the courts of the state” after practicing attorney, indicating its not enough to simply be a licensed attorney advising clients.

But the matter is murky. University of California Hastings professor David Levine said the term “practicing” is generally just taken to mean licensed, and he said he saw nothing to imply the Legislature intended otherwise when it enacted the code section in 1947.

We’ve so far been unable to get a copy of the legislative history of the bill that enacted California Government Code Section 27701, which may provide some clues as to the Legislature’s exact intent.

“Health services, the sheriff, DA; we all come out of the same budget. We have to serve together or we’re all competing for dollars.” tweet this
Since its announcement, Marcus’ hire has been shrouded in controversy, in part due to the hiring process, which saw District Attorney Maggie Fleming, Probation Chief Bill Damiano and Undersheriff Billy Honsal sit on an advisory panel to the board that didn’t include a defense attorney. Local attorneys and national legal experts have described the process as inappropriate.

Marcus’ resume does little to allay those concerns, as during his tenure in Lassen he was accused of being too cozy with prosecutors and failing to carry a fair share of his office’s caseload. (Read more about all that in past coverage here.)

As noted above, Marcus hasn’t returned our calls for comment but he did speak to the Times-Standard earlier this month and said he didn’t have issue with the way the hiring panel was composed, noting that despite adversarial roles, a public defender needs to collaborate with his or her counterparts.

“There is a lot of interaction that take place outside the courtroom (sic),” Marcus is quoted as saying. “Health services, the sheriff, DA; we all come out of the same budget. We have to serve together or we’re all competing for dollars.”

Talk like this will surely do little to dampen the rising outcry from the local defense bar, members of which have pointed out that a public defender has the unique role of standing alone between an indigent client and the vast powers of the state’s prosecutors and police.

Members of the local defense bar have indicated they are especially alarmed at the notion that Marcus hasn’t practiced criminal law in California since leaving Lassen County in 2011, noting that the state has since passed a prison realignment bill and Proposition 47, which have combined to significantly alter the state’s justice system, impacting everything from charging decisions and sentencing to defendants’ eligibility for diversion programs like drug court. If Marcus hasn’t been following the intricacies of these changes to the system, it’s a lot to catch up on, they contend.

For his part, Griego said he’s willing to hear the county out. But he is demanding an explanation.

“I’m open to listening if they have some great argument as to why he does meet the qualifications — some interpretation or experience we’re unaware of,” Griego said. “Then, maybe we’d rethink our position.”