PenAir Scales Back But Remains Confident in Portland Route 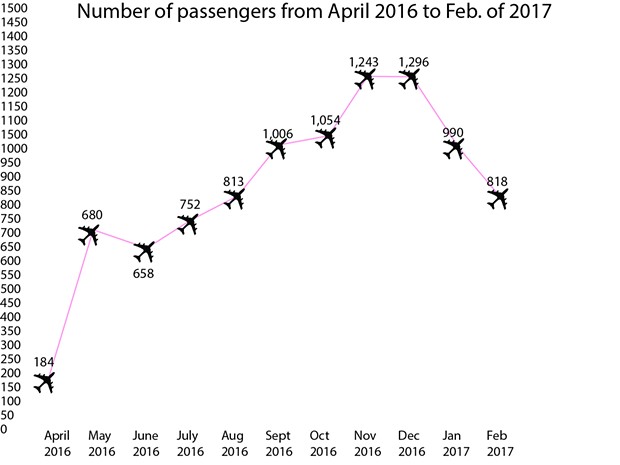 PenAir recently reduced the number of daily flights from the Arcata-Eureka Airport to Portland from three flights to two, but insists the change isn’t related to passenger interest in the route.

Missy Roberts, the company’s vice president of sales and marketing, said the changes will affect everyone looking to fly with PenAir. She said the changes are mainly due to two issues: a shortage of pilots and the lack of a close maintenance space.

Roberts said PenAir’s completion rates — the percentage of scheduled flights that are completed — dropped almost 25 percent, from 95.6 percent in 2016 to a 72 percent this year. Roberts said this is mostly due to a Federal Aviation Administration regulation that requires pilots to work more hours.

Emily Jacobs, program director of the Eureka-Arcata airport, said in an email to the Journal that PenAir was scheduled to land 950 flights and completed 859 from April of 2016 to February of this year, for a rate of about 90 percent.

But Roberts said a new regulation requiring pilots to work fewer hours has led to PenAir having fewer pilots available. Roberts said this isn’t just PenAir and a similar process is happening at pretty much every airline in the United States. “There are fewer pilots out than there are needed,” Roberts said.

PenAir has the same number of pilots as it started with, although the company has since added six new routes and Roberts said this stretches crews thin.

The other major problem that led to the decrease in completion rates was maintenance operations. Because the company is based out of Anchorage, Alaska, every time a plane needed a new part it had to ship it from Anchorage to a facility in Aurora, Oregon.

Roberts said the company’s on-time performance dropped from just about 66 percent to a little over 50 percent. PenAir’s controllable delay rate — which is excludes unavoidable weather delays — is about 81 percent on time.

But using the facility in Aurora for maintenance checks led to problems with completion rates because the company would need to fly the planes to the facility to be checked. If there was something wrong with the plane, even if just a light was out, it would need to ship the part and repair it in Aurora, a slow and inefficient process that severely dug into completion rates.

“Even though it’s 15 minutes away [by flight], it still takes time to preare the crew,” Roberts said.
The company will soon be operating a leased facility at the Portland airport and started shipping plane parts there about three months ago. Roberts said having a facility in Portland will allow routine checks to be a lot faster and help completion rates.

As of January, 9,186 people had flown from Arcata-Eureka to Portland on the new PenAir. But Roberts said she doesn’t expect the number of passengers to change with the new schedule, an indication that perhaps not all three daily flights were full leaving the local airport. But Roberts said she expects the market will continue to grow, and PenAir will grow with it.

PenAir began the new route with only two daily flights from Arcata-Eureka and Roberts said it was so excited by how successful the route was initially that it added the third flight. Roberts said, in hindsight, maybe the expansion was a mistake.

Editor's note: This story was updated from a previous version to correct an error regarding the new regulations referenced by Roberts. The Journal regrets the error.