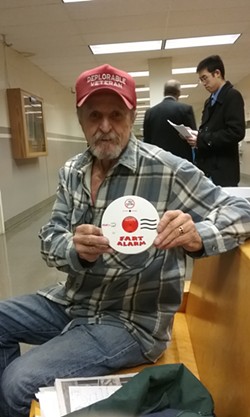 Judge Timothy Cissna ruled this afternoon that the phrase "insert fart smell here," will remain in special elections material to be distributed to Southern Humboldt voters this spring. The phrase was written by Scotty McClure as a rebuttal to arguments in favor of Measure W, a parcel tax intended to fund the rebuilding of the Jerold Phelps Community Hospital in Garberville.

Representing the county elections office, Deputy County Counsel Joel Ellinwood said the county registrar of voters, Kelly Sanders, found the language inappropriate to be distributed to taxpayers with taxpayer money, and was asking the court to rule on whether or not the phrase could be deleted.

"A ballot pamphlet is not an unobstructed forum for free speech," argued Ellinwood. "It is a limited forum."

Ellinwood cited state elections code section 9380, which says a judge may issue a "peremptory writ of mandate or an injunction ... upon clear and convincing proof that the material in question is false, misleading, or inconsistent."

Ellinwood then attempted to convince Cissna that the phrase "insert fart smell here" met that criteria.

"Mr. McClure's rebuttal ... is a vulgarity that expresses contempt for the whole process," Ellinwood said, explaining that McClure's original statement against Measure W, which cited a history of over-taxation in Southern Humboldt and dismay at the measure's 45-year shelf life, could stand alone. The fart joke, he says, does not add anything to the process, and it was unfair to ask the elections office to distribute pamphlets using taxpayer money that had the word "fart" in them.


"Is there extra cost to the taxpayers to add in those 15 or so lines?" asked Cissna.

"No," said Ellinwood, slowly. "But there is a cost to the integrity of the elections process. This is not a forum for a vulgar joke."

When asked to defend his words, McClure resisted pressing on the toy "Fart Alarm" he had brought with him as a prop. He reiterated that he was tired of the taxes, and with the rhetoric around taxes and the election. Cissna gently redirected him several times as he began gesticulating toward the court and veering into the 2016 presidential elections.

"I formed an opinion. That is my rebuttal," said McClure. "I didn't swear, I didn't cut anybody down. They have to print this, no interpretation should be allowed by the elections department. I think I have a right to that opinion."

"The First Amendment does not allow for unlimited speech anywhere," insisted Ellinwood, citing the argument that "you can't shout 'fire' in a crowded theater."

"The purpose of the ballot pamphlet is to provide relative merits or demerits," said Ellinwood. "He didn't have to write 250 words, he could have written four words. Not those four words."

"Could he have written 'Measure W stinks'?" asked Cissna.

"That wouldn't have given information on the measure," said Ellinwood.

"That's not my question," said Cissna.

"The purpose of the pamphlet is to provide information to voters," said Ellinwood.

"Isn't it to provide an opinion on a measure?" asked Cissna.

"What if he had said, 'I disagree with Measure W'?" asked Cissna.

"It needs to address merits or demerits of a measure," said Ellinwood.

"That's not my question," said Cissna again. "What if he had said 'I disagree with the above'?"

"That doesn't say much," said Ellinwood, adding that the county was asking the court to decide on the phrase McClure had actually used, not hypotheticals.

Cissna said that he was not suggesting alternate language, just trying to make a point. He asked McClure what he thought.

"I think I had better be quiet, because I think I'm winning," said McClure. The judge frowned.

"I just used the best words I could find," said McClure, to sum up. "It just came to me."

Cissna asked the courtroom to clear briefly so he could think about his decision. When he called all parties back in he said that he could not see how the phrase "insert fart smell here" was false, inconsistent or misleading. The language as submitted by McClure to the county clerk via fax also included the letter "W" with two arrows pointing to it, so it clearly related to the measure in question. He quoted a 2002 case in Huntington Beach over a similar question, in which the court stated “Courts must be extremely reticent in undertaking the essentially political task of playing copy editor with one side’s working of a voters’ pamphlet argument. In the political arena, after all, one person’s relevant argument is another person’s nonsense.”

"I don't think it's vulgar or approaches vulgarity," said Cissna, referring to the fart joke. "Some people might be offended but that's not a reason to strike it. Bottom line, I am going to deny the petition."

After leaving the courtroom, Ellinwood said that filing a writ with the court of appeal would probably not be an option at this time, as legally the elections office had to have the pamphlets to the printers in the morning, and then in the mail to voters within a prescribed amount of days.

McClure, a 68-year old veteran and member of the Southern Humboldt School Board, says he will bring up the case in the next school board meeting, and would like to present it to students as an example on how to fight for the First Amendment.