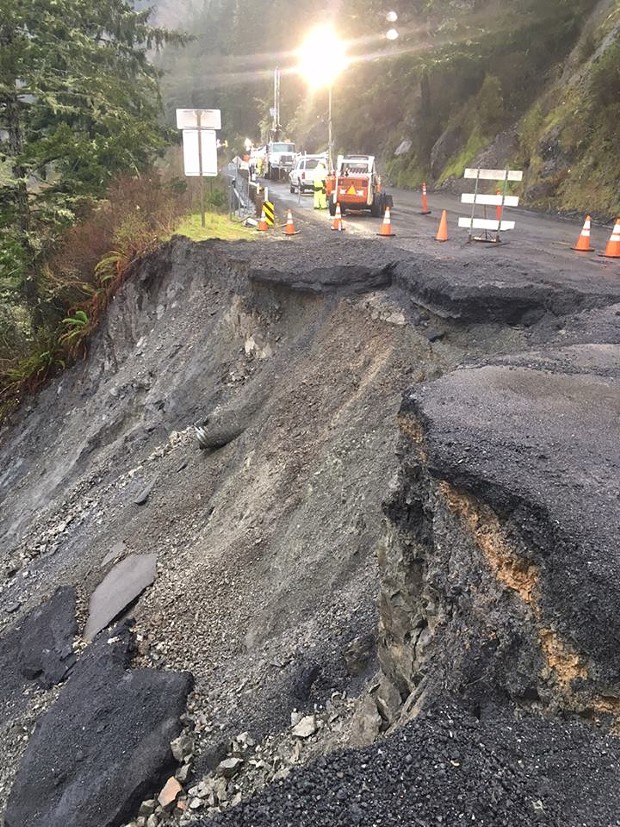 Update: Motorists traveling along the Last Chance Grade on U.S. Highway 101 south of Crescent City should expect up to 20 minute delays - day or night - as Caltrans works to stabilize a section of roadway there that slipped out on Wednesday.


TRAFFIC ADVISORY / UPDATE: Motorists using U.S. Highway 101 at Last Chance Grade in Del Norte County (~10 miles south of Crescent City) should anticipate one-way traffic control via temporary traffic signal with 10-to-20 minute delays at ALL HOURS.
Delay lengths are subject to change, and we will update the public with any new changes to delays or work schedules.
Originally, we had anticipated that 60-minute delays would be necessary at this location during nighttime hours only. However, our engineers, field staff, and contractors have found a way to further minimize impacts to traffic while performing the work in a more efficient manner. As the nature of work changes, however, the delay schedules may change as well.

Previously:
A Caltrans spokesperson said today that experts are working on an emergency plan to shore up a section of Last Chance Grade that hasn’t moved in a few years but yesterday lost another 10 feet of roadway.
In the meantime, the geologically active portion of U.S. Highway 101 — located approximately 10 miles south of Crescent City in Del Norte County — remains open to one-way controlled traffic.

He emphasized that the area is currently under 24/7 monitoring during inclement weather along with “near real-time monitoring equipment” to keep a close eye on any movement.

With a long history of instability, the segment of 101 is down to 18-feet of roadway in that section and any further loss could lead to a highway closure, Cochrane said, adding that construction crews were headed to the site this morning. The current plan, he said, is to drive in “left over piles from the Willits bypass project to shore up the area so it doesn’t slide any further.”

"Of course, we will close it down if we have to,” Cochrane said.

That status of the roadway is subject to change and Caltrans will be posting updates. The approximately 9-mile stretch is the subject of a major replacement effort due to the frequency of roadway failure and mounting maintenance costs to keep the vital highway connection open.

According to Caltrans Economic Impact Study, the closure of 101 at Last Chance Grade would result in: $1.3 million per day in travel costs for commercial and passenger vehicles — $450 million each year, as well as $300 to $400 million in reduced economic output in Del Norte County, 3,000 to 4,000 jobs lost, and $130 million in lost wages annually.


U.S. Highway 101 about a half mile north of Rudisill Road (Last Chance Grade) is experiencing the failure of a retaining wall. This is at the location where 24/7 one-way traffic control with a temporary signal has already been in effect.
The highway lost another 10' of width and is down to 18' for the one lane of traffic. Caltrans staff believe the highway is still safe and the highway remains open at this time. Staff will remain onsite 24/7 to monitor the highway to ensure public safety.
We will provide updates as needed until repairs have been completed.

UPDATE: U.S. Highway 101 at Last Chance Grade in Del Norte County will be under intermittent full closures during NIGHTTIME HOURS ONLY to accommodate equipment working at the side of last night's slide on the south end of the grade.

The closures are to allow large equipment to drive "micro-piles" (steel rods approx. 8 inches in diameter which will be filled with concrete) into the ground below the remaining lane to ensure that it stays stable. Crews will drive one pile at a time, remove the equipment to allow traffic to clear, then resume driving piles.

This work will be done between 8 p.m. and 7 a.m. until this portion of emergency repair work is completed. Motorists should anticipate 60-minute delays during nighttime hours. Daytime traffic remains under one-way traffic control, but should not experience further delays as a result of this work.