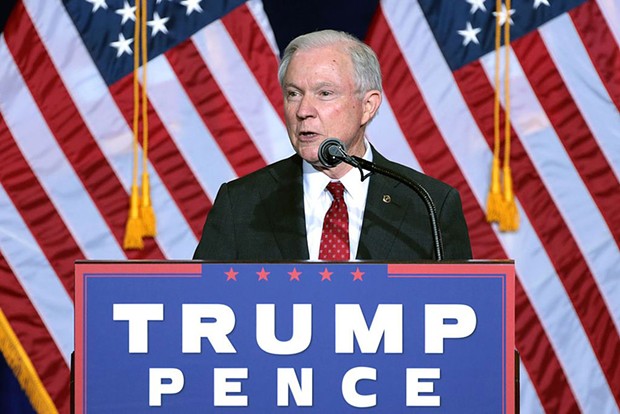 U.S. Attorney General Jeff Sessions tossed some more shade on marijuana this week, adding to growing concerns that a federal crackdown is looming for the $7 billion industry.

Speaking about efforts to combat violent crime and “restore public safety” before a group of state and local law enforcement in Richmond, Virginia, Sessions spoke about the need to curb the nation’s growing heroin epidemic.

“So we need to focus on the third way we can fight drug use: preventing people from ever taking drugs in the first place,” Sessions said in the prepared speech. “I realize this may be an unfashionable belief in a time of growing tolerance of drug use. But too many lives are at stake to worry about being fashionable. I reject the idea that America will be a better place if marijuana is sold in every corner store. And I am astonished to hear people suggest that we can solve our heroin crisis by legalizing marijuana — so people can trade one life-wrecking dependency for another that’s only slightly less awful. Our nation needs to say clearly once again that using drugs will destroy your life.”

Coming from the man who infamously said last year that “good people don’t smoke marijuana,” Sessions’ views on the subject shouldn’t come as much of a surprise. It should be noted, however, that the contention that marijuana is “only slightly less awful” than heroin is ridiculous.

According to the Centers for Disease Control and Prevention, an estimated 91 people overdose daily from opioid use. In contrast, there has never been a documented overdose death due to marijuana use. Time magazine also reports that while opioid addiction “tends to be long-term and difficult to successfully overcome,” a 2015 study of marijuana found that two-thirds of people diagnosed with cannabis use disorder could kick the habit within three years.

In the wake of Sessions’ comments, a host of doctors have also come forward to report that while they routinely see patients treated and hospitalized from complications of heroin and opioid use, complications from cannabis use rarely — if ever — necessitate medical treatment.

Sessions went on to trumpet the Just-Say-No campaign of the 1980s and 1990s, saying it brought down drug use and addiction. While none of this is really surprising, it likely does little to ease industry concerns that Sessions will use his power and discretion to reverse Obama administration guidelines directing prosecutors to take a hands-off approach with cannabis businesses and activities that are in accordance with state laws.

Similarly, Sessions' comments to reporters after the event are likely to perk the ears of some in the 28 states that have now legalized some form of medical marijuana.

“I think medical marijuana has been hyped, maybe too much,” Sessions reportedly said. “Dosages can be constructed in a way that might be beneficial, I acknowledge that, but if you smoke marijuana for example, where you have no idea how much THC you’re getting, it’s probably not a good way to administer a medical amount. So forgive me if I’m a bit dubious about that.”

The comment seems to put Sessions at odds with his boss, President Donald Trump, who has repeatedly said he strongly supports medical marijuana.

Numerous studies have also shown that cannabis can be very effective in treating pain and in some cases is a preferred alternative to highly addictive opioids. Additionally, some research suggests that states with legalized medical marijuana have seen a drop in prescription drug overdose deaths and anecdotal evidence even suggests marijuana may be helpful in treating opioid addiction in some cases.

How Sessions ultimately approaches marijuana enforcement has the potential to hugely impact Humboldt County, where the marijuana industry accounts for a third of its economy by some estimates. To learn more about the current state of the industry on the North Coast, check out our Cannabis Issue on newsstands now.