HumBug: Come Closer, Said the Fly to the Fly 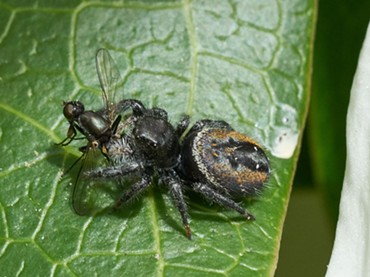 Recently, scientists have calculated that spiders devour between 400 and 800 million tons of insects annually. Right now in my yard, though, on the fence where the white clematis chokes out everything else, there is a massacre going on and spiders are not the center stage players. Golden haired dung flies are chasing and eating flower flies and anything else that moves. Dagger flies (named for their long piercing mouthparts) perch, waiting for some hapless meal on wings to fly into range. Meanwhile, much smaller flies hunt things even smaller than themselves. With mind numbing consistency, I see predatory flies eating other flies. I think the mass of gleaming white flowers beckons to nectar and pollen feeders which are in turn followed by their predators. Like the spiders that hunt them, raptoral flies inject paralyzing venom and digestive juices, making it easy to sip their prey's predigested innards through hollow mouthparts. Many of them can wield this weapon defensively as well as offensively, so it is best to handle them with care. 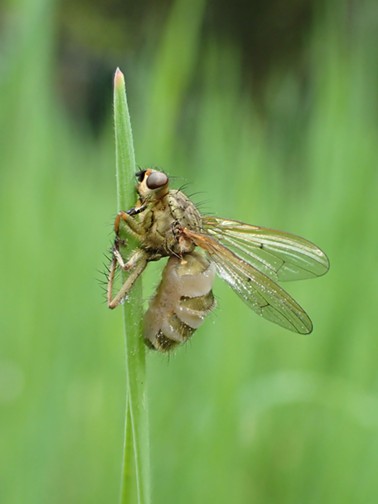 Life for the hunters isn't all gravy, though. Today I saw my first “zombie dung fly” of the season. Attacked by a fungus, probably related to Entomophthora muscae, the infected fly migrates to a high blade of grass, lands, locks up and dies. In a day or two you can see the fungus protruding from between the cracks in its victim's exoskeleton so it can release spores to invade another generation of flies.