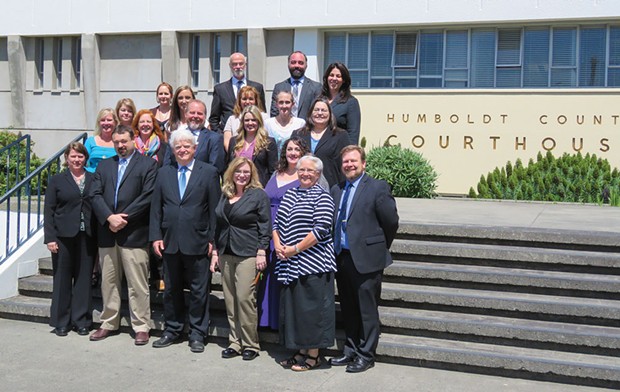 In an unprecedented move, all nine Humboldt County deputy public defenders sent a letter to the Board of Supervisors on Friday urging it to reconsider the recent hiring of their boss, Public Defender David Marcus.

“We, the undersigned, write this letter to express our belief that David Marcus is not qualified for the position of Humboldt County Public Defender,” the letter states, going on to contend that Marcus’ lack of experience and expertise “not only jeopardizes the rights of our clients to the effective assistance of counsel, but puts staff at risk of unhealthy and unethical work conditions.”

Marcus’ hiring has drawn public controversy since the day it was announced last month. A local attorney — Patrik Griego — filed a lawsuit asking a judge to block the move, alleging Marcus doesn’t meet minimum state qualifications for the post, which require an attorney to have been practicing in “all the courts of the state for at least the year preceding” his or her hire.

Marcus served as Lassen County’s public defender from 2005 to August of 2011 and has lived on the East Coast since then, most recently living in Florida, where he was licensed as both a real estate agent and an insurance broker. In a resume submitted to the county, Marcus represented that he’s been working for the Walnut Creek law firm of Cella, Lange and Cella since 2012 as a contract attorney doing transactional real estate and property loss consulting. But Journal attempts to get an idea of exactly what — and how much — work Marcus did with the firm have been unsuccessful.

A Journal message left for Marcus on Monday was not returned.

In a statement released in response to Griego's threat that he would file a lawsuit challenging Marcus' hire unless the county proved he was qualified to hold the post, the board of supervisors touted Marcus' two decades of experience in criminal law and stated that he "meets all statutory requirements for the position."

Griego alleges in his suit that Marcus has not practiced criminal law since leaving Lassen County and is therefore unqualified to be the county’s chief public defender and carry the responsibility of standing between indigent clients and the powers of state police and prosecutors. Friday, visiting Humboldt County Superior Court Judge Sean Dowling granted a request from Griego, finding good cause to allow him to immediately serve subpoenas seeking Marcus’ past employment records.

“He does not appear to be current on the state of criminal law in California, which has undergone significant changes over the past five years, during which time Mr. Marcus was not practicing criminal law or even living in California,” the letter states. “He is not capable of giving sound advice because he lacks the foundation to do so. Since joining the office, Mr. Marcus has displayed difficulty handling simple misdemeanor matters, and we have no confidence whatsoever that he is capable of handling more serious matters, or that he is even willing to handle such cases.”

“As deputy public defenders, we have a duty to zealously protect the rights of our clients to have effective assistance of counsel,” the letter continues. “We all take that duty extremely seriously. The Board’s decision to hire an unqualified attorney to be Public Defender compromises those rights and puts our clients at a very real and immediate risk.”