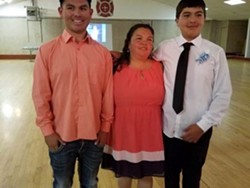 The Wiyot Tribe is reporting via social media that Alex Lopez, 15, an enrolled member of the tribe, died Saturday afternoon while eeling at the mouth of the Eel River. Lopez was experienced in the traditional Wiyot practice but waves pushed a log onto him in a freak accident. According to a report from KIEM News Channel 3, local volunteer fire departments searched for him and, once found, the U.S. Coast Guard transported him to St. Joseph Hospital, where he was pronounced dead.

A crowdfunding campaign organized by Lopez's family describes him as a "eeler, fisherman, hunter, and stick player." Members of the tribe are preparing for a memorial, scheduled for Saturday at Saint Joseph Church in Fortuna. Lopez was featured in a video about eeling created by then-North Coast Journal staff writer Heidi Walters, who wrote about the practice in 2014. That video can be found below.


Editor's note: This story was updated from a previous version that incorrectly identified Lopez's cause of death and the hospital to which he was transported.