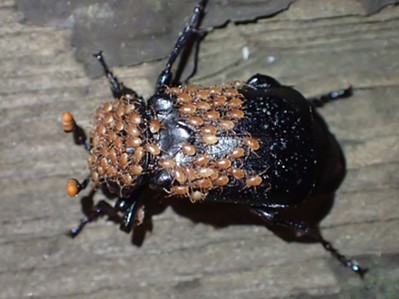 Hoping to attract one of the huge and impressive Ceanothus or Polyphemus moths that live hereabouts, I've been running a light trap when it isn't raining too hard — so far without luck. You never really know what might show up and last night was no exception. Among the expected looper moths, crane flies and various gnats was a medium sized black beetle. 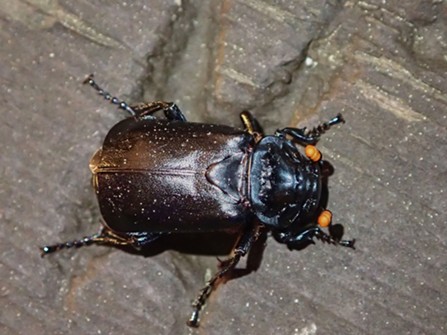 I recognized it from a distance as Nicrophorus nigrita or black burying beetle. These beetles are notable for a number of different reasons. They are extremely unusual in the insect world in that both males and females help in rearing the young. Both sexes will tunnel under a small dead animal and, lifting it like a weightlifter doing a bench press, move it a tiny bit at a time to soft earth. Once there, they dig a depression big enough to encompass the carcass, build a chamber around it, strip it of fur or feathers, mold it into a ball with a depression on top, and fill that with regurgitated predigested mouse. Then after the eggs have hatched they call their offspring to the fount where they both proceed to feed their young. There is a very good article on this beetle family in the August 1976 edition of Scientific American, available online. 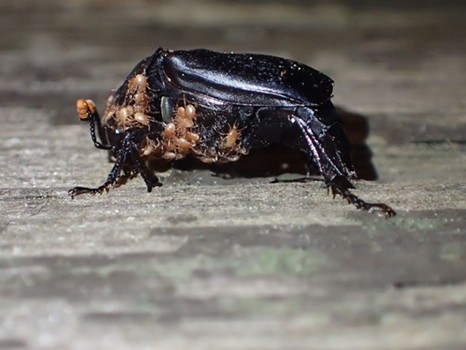 When I got close, I was amazed to see it nearly covered with tiny brown mites. Their relationship with the beetles is complicated. Researching them I learned they are Poecilochirus mites, which feed on and lay their eggs in carrion. They are phoretic, meaning they like to hitch rides on beetles who are likely to be going their way. Once there, they lay their eggs, which hatch and feed on the carcass. The young will also eat any fly maggots (competitors for the beetle's larvae) and, if overcrowded, will resort to eating the beetle larvae as well.

I posted about this on Facebook and got a record number of likes for me and dozens of replies. Funny how things so disturbing get so much love.