HumBug: The Birth of a Giant

Today, near the end of my walk along the Van Duzen River, a little tangle near the tip of a naked willow sprig caught my eye. At first I thought it was a bit of storm deposited flotsam tangled on the end of the branch, but there was a “legginess” to it. Experience told me it was most likely a dragonfly exuvia, the empty husk left behind when the insect abandons its aquatic larval form, climbs out of the water, casts off its juvenile shell and takes to the sky, an air breathing aerialist for the rest of its days.

It was a cast off shuck all right. And although the size was right, long antennae indicated it was something else. Both dragonflies and their smaller cousins damselflies have millimeter length antennae, while this creature's had been at least 10 millimeters long. 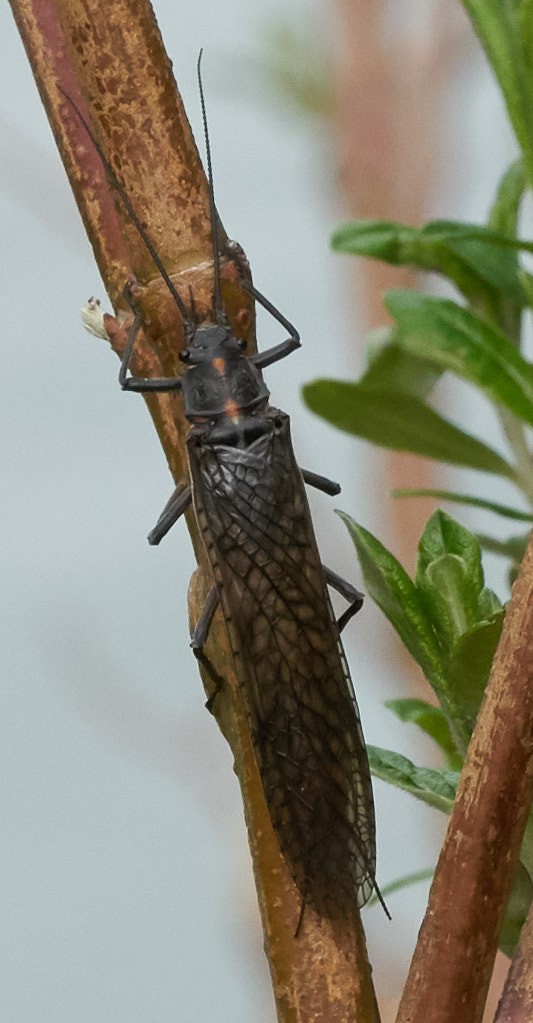 Although I'd never before seen this kind of exuvia, I had a suspicion as to what it might be. A few years back I got a picture of a California giant stonefly, or salmonfly (Pteronarcys californica).

A bit of careful scanning of the nearby willows revealed an adult, about 7 centimeters long. Its size, dark wings folded flat over its back and distinct red markings confirmed I had the right species. The largest member of order Plecoptera in our area, it is an indicator that the watershed and river are healthy as the larvae don't just live in the water but actually breathe it through gills. 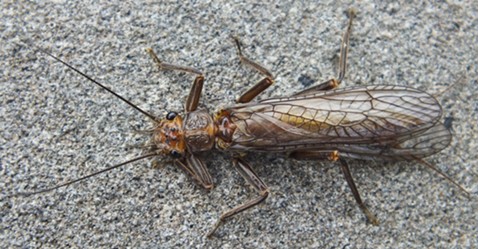 Stoneflies along with mayflies and caddisflies might be considered the “Holy Trinity of fly fishermen,” as they are the primary food for many species of game fish. Most artificial flies are tied to simulate one of them. I imagine the giant must be a tempting prize for a fish as it's one of the largest insect foods they are likely to encounter.