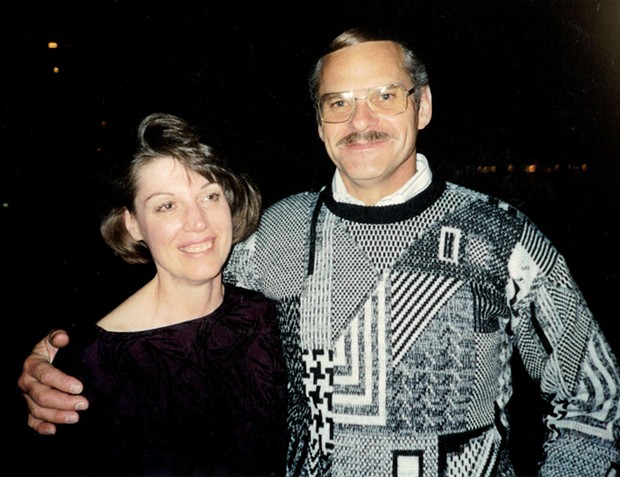 Years before Dick Magney was admitted to St. Joseph Hospital suffering from a series of life-threatening conditions, he had spent time at a local nursing home while recovering from leg surgery.

That experience left the former truck driver who for decades battled constant pain and chronic illness determined to never again find himself in the same situation. With his health declining, Dick Magney and his wife Judy had an attorney draw up an advanced directive outlining his final instructions.

Those included being allowed to die with “dignity” and “without prolonging my death with medical treatment ... that will not benefit me.” Dick Magney did not get his wish.

Soon after he was admitted to the hospital in February of 2015, the county obtained a court order that forced him to receive antibiotics for a heart infection even though he had already refused surgery. That temporarily reversed the palliative care choices made by the Magneys with the support of his attending physician, who had determined further treatment would be futile.

While he lived long enough to see the county’s intervention overturned, the self-described “stubborn Swede” died a few months later in the same nursing home he had tried so hard to avoid. He was 74.

“It’s so sad. … It’s tragic that he had to pass away that way,” says attorney Allison Jackson, who represented the couple in their months-long legal battle with the county. “It’s tragic that the family had to go through what they went through.”


Late last year, an appellate court awarded Judy Magney attorney fees and other costs associated with the case in a scathing opinion that called the county’s actions “profoundly disturbing.”

Now settlement talks are underway. Jackson filed a claim on March 30 asking for $1.44 million. While that amount included $288,000 for Judy Magney’s legal bills and other costs, Jackson is also seeking $1.15 million in punitive damages, which will require a separate lawsuit if the county doesn’t agree to close out the case without further legal action.

In the filing, Jackson alleges county employees involved in the case committed elder abuse, inflicted intentional emotional distress, defamed the Magneys, falsely imprisoned and committed medical battery on Dick Magney, disclosed private facts about the couple and conspired to violate their civil rights, among other claims.

That included a period of time when the county refused to give Judy Magney any information about her husband’s condition while he was under a temporary conservatorship, an action Jackson described as “abject cruelty and vindictiveness.”

During the same temporary guardianship, the county also failed to apply for MediCal benefits on Dick Magney’s behalf, which “created even more emotional and financial burdens for the Magneys,” Jackson writes in the claim.

“Sadly, Mr. Magney slowly died on the County’s terms, not his own, in a skilled nursing home the County chose for him, the cost of which, once the benefits ran out, was to be borne exclusively by the Magneys,” the claim states.

Jackson says she hopes this final chapter in the case will soon come to a close.

“I’m still very guardedly optimistic that the people in charge of making the decision in this matter, the board of supervisors, are all very kind, compassionate people who will make the right decision to stop this,” she says. “What happened here was horrific.”

County Counsel Jeffrey Blanck did not respond to the Journal’s request for comment but was quoted in a New York Times article this week, saying the county stepped in because Dick Magney had requested antibiotics at times and “he was coming in and out of competency.”

Blanck also spoke with the legal blog Northern California Record in February, saying the forced treatment was an attempt to make Dick Magney more comfortable after the county received a report of possible neglect.

“We weren’t requesting surgery or cutting off an arm,” the county counsel says in the article. “It was simply, ‘You need antibiotics to treat a condition that was painful.’”

Jackson calls his comments “callous” and points to other portions of his interview in the claim, saying he and the county continue to falsely accuse Judy Magney of abuse without evidence.

“It’s like they’re recreating the universe to justify their civil rights violations,” she says, noting the purpose of an advance directive is to make sure final wishes are followed, especially when patients can no longer participate in their own care decisions.

The case started soon after Dick Magney was admitted to St. Joseph Hospital suffering from malnutrition, likely related to his heart infection, and pressure sores in the outline of a toilet seat from his long bouts in the bathroom due to colon issues. He was terminally ill.

Adult Protective Services started an investigation after receiving the report of possible caregiver neglect. That led to a series of court petitions by Deputy County Counsel Blair Angus, asserting the need for the county to take over his medical care decisions and later attempts to place him under a conservatorship with the Public Guardian’s Office.

The court filings failed to mention that Dick Magney’s treating physician — the medical authority under California’s health care decision law — had already determined his prognosis was grim and that he faced a "really terrible quality of life" even if he made some sort of recovery.

Instead the county depended on a statement from a VA physician — who had not seen the Navy veteran in months and was not involved in his hospital care — that stated Dick Magney could die without treatment.

An appellate panel found the county was only able to temporarily seize control away from the Magneys by misleading the court with an "appallingly inadequate" request that included "glaringly incompetent and inadmissible evidence" and "multiple levels of hearsay."

"We cannot subscribe to a scenario where a governmental agency acts to overturn the provisions of a valid advance directive by presenting the court with an incomplete discussion of the relevant law and a misleading compendium of incompetent and inadmissible evidence and, worse, by withholding critical evidence about the clinical assessments and opinions of the primary physician because that evidence does not accord with the agency's own agenda," the opinion states.

The county never pursued the unsubstantiated neglect allegations but continued to assert the claim throughout the case, saying there were concerns Judy Magney was not following her husband’s wishes.

According to Jackson’s claim, the appellate ruling, which the county unsuccessfully tried to have depublished, “provides a liability ‘roadmap.’”

That includes, she contends, stripping away claims to “qualified immunity” for those involved in the case — the legal protection afforded to government employees "insofar as their conduct does not violate clearly established statutory or constitutional rights of which a reasonable person would have known," according to case law.

Jackson points to the phrasing of the opinion, which states: "No reasonable person, let alone a governmental agency, would have pursued such a course." That, she says, opens a legal door to pursuing claims against individuals as well as the county.

While stating that no one is implying “evil intent,” Jackson says there are valid questions about the conduct of APS supervisors who failed to interfere when a decision was made to challenge the clinical assessment by Dick Magney’s doctor and members of the county counsel’s office, who purposefully withheld information from the court.

“No one has stepped up to the plate and said, ‘What we did was wrong and we apologize.’ ... It’s almost like they would do it again,” Jackson says. “That’s not how you fix things.”