From Haight Street to a Humboldt County homestead: It's a familiar story for many back-to-the-landers who arrived in our region in the late ’60s and early ’70s, fresh from the 1967 Summer of Love. Dottie Simmons, who settled down in Humboldt County in 1968, made her homestead near Dinsmore, raising kids, canning preserves and starting a successful small business. But this year a small piece of her former life came back to prominence. A poster illustrated by Simmons in 1968, for a four-day show at San Francisco’s Avalon Ballroom, is being featured at the deYoung Museum as part of its Summer of Love exhibit, which runs through August 20.

Simmons, who recently attended the exhibit’s opening, said she was honored to be part of the show. Simmons drew the poster, which features an Alice in Wonderland figures and a frame of bright flowers, in one night using pen and ink. It was so long ago that Simmons says she doesn’t remember exactly where she did it, only that she worked on someone’s floor.

The show itself featured Iron Butterfly (“In-A-Gadda-De-Vida”) and a trio of other psychedelic rock bands. Simmons, then a teenager, said she was a “puppy” at the Avalon, a short-lived music venue in San Francisco’s Polk Gulch that managed to cram most of the era’s headliners onto its stage between 1966 and 1969, including The Doors, Janis Joplin and the Grateful Dead. (The Dead played there 29 times). Against this backdrop, Simmons ran messages, cleaned up after shows and worked the coat check.

“That era, poster included, pops into my consciousness now and then,” she told the Journal. “Usually when I’m reminiscing with friends or going through my art stuff.”

If you want to reminisce yourself, or get an idea of what turned Simmons’ generation on 50 years ago, more information about The Summer of Love Experience: Art, Fashion, and Rock & Roll, can be found on the deYoung’s website. 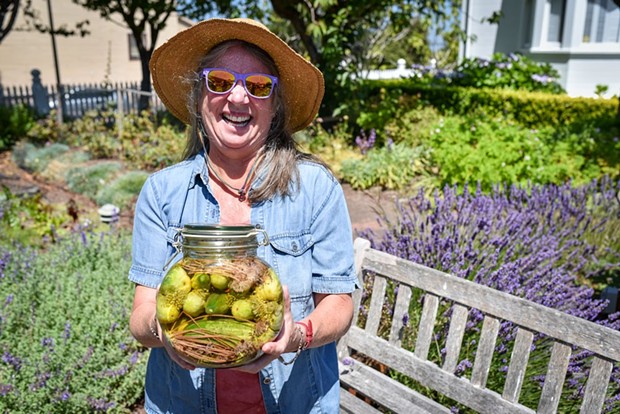