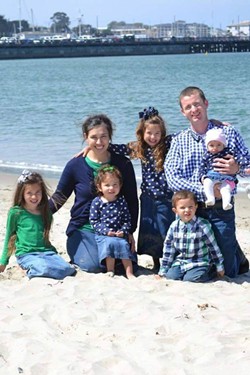 The CHP has confirmed that 3-year old Aubrey, the Woods' daughter, has succumbed to her injuries.

The CHP has confirmed the name of the passenger in the Chrysler who died in the crash as 53 year old Janine Elaine Orcutt of Hoopa.

According to a press release from the California Highway Patrol and a fundraising page set up to defer funeral costs, Yesenia Wood, 26, was driving her husband and five children from Oroville to visit family in Manila when their Toyota Sienna left its lane at about 6:30 p.m. and collided head-on with a Chrysler driven by 55-year-old Kevin Loren Orcutt, of Hoopa.

One passenger in the Chrysler, who is unnamed in the press release, sustained fatal injuries. Yesenia Wood, who was pregnant, lost her unborn child. The couple's 3-year-old daughter Aubrey was transported out of the area with major injuries.

According to the CHP, all the children were restrained in seat belts and car seats and impairment is not believed to have been a factor in the crash.

According to a family friend, community members have stepped up to provide new car seats for the grieving family.

From the California Highway Patrol:

For reasons still under investigation, the Toyota crossed into the eastbound lane, directly into the path of the Chrysler. The right side of the Toyota struck the front of the Chrysler. The force of the impact caused the Toyota to overturn and come to rest blocking the eastbound lane. The Chrysler traveled off the roadway and down a steep embankment colliding with a tree. Two passengers in the Chrysler were not wearing seat belts at the time of the collision and sustained major injuries. A passenger in the right front seat of Chrysler sustained fatal injuries and died at the scene despite lifesaving efforts by medical emergency personnel.

Mrs. Wood’s five children were passengers in the Toyota. The children were restrained in seat belts and child safety seats. Several of the children received major injuries, with one child being flown to a hospital out of area for further medical treatment. Mrs. Wood's unborn child sustained fatal injuries.

The east and westbound lanes of SR-299 were closed while emergency medical personnel administered medical aid. Later, one-way controlled traffic was maintained while the collision scene was being investigated.

All of the involved parties were transported by ground ambulance to St. Joseph’s Hospital in Eureka and Mad River Community Hospital in Arcata.

Alcohol and/or drug impairment is not suspected to be a factor in this collision, which remains under investigation by the Humboldt Area Office of the California Highway Patrol.