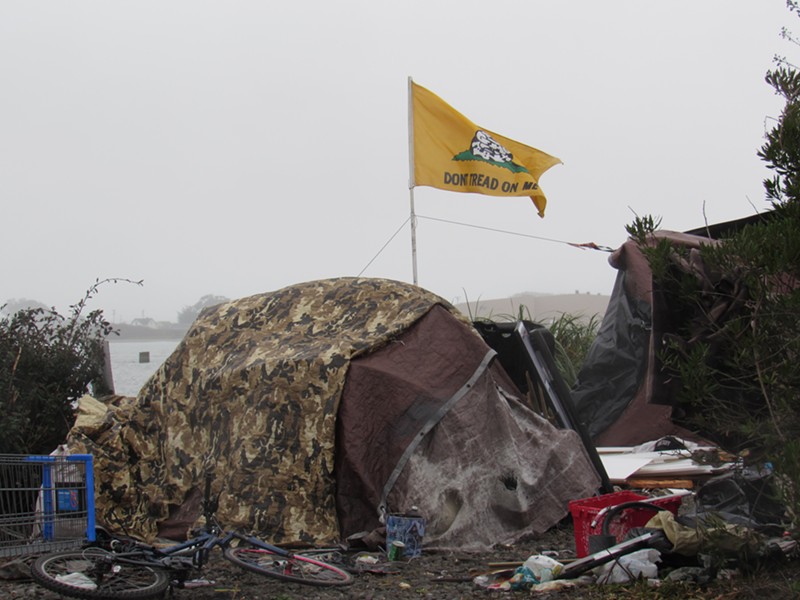 A federal judge dismissed portions of a lawsuit claiming that Eureka’s ordinances against camping and the storage of personal items in public spaces violate the Constitutional rights of homeless individuals but is allowing an amended complaint to be filed.

U.S. District Court Judge Jeffrey White also found the civil suit filed against the city by attorney Peter Martin could proceed on the Eighth Amendment claim that outlawing public camping without providing adequate shelters amounts to cruel and unusual punishment by making homelessness itself a crime.

Martin’s law partner Shelley Mack says a decision is still being made on whether to refile on the issues the judge left the door open to — allegations that the city's ordinance violate due process rights, protection against unreasonable search and seizure and the right to privacy.

“The Eighth Amendment claim is really the heart of the case and that is the claim that we are really focusing on,” she says.
The case, which Martin and Mack are now seeking to pursue as a class action on behalf of Eureka’s homeless residents, stems back to the city’s move last year to clear out the large encampment in the Palco Marsh.

Eureka City Attorney Cyndy Day-Wilson says the judge’s decision not to grant the city’s motion to dismiss the Eighth Amendment cause of action “was based on the court’s belief that it needed more facts to make such a determination.”

“It was not an outright rejection of the City’s position on this issue,” she wrote in an email to the Journal. “It was only a denial because it only had one side’s version of the fact … namely, the Plaintiffs. The City is confident that once the court hears all of the facts that the court will rule in the City’s favor.”

Mack says she expects to petition the court to proceed as a class action sometime this summer, which would expand the group represented by the lawsuit and bolster the argument that the city’s camping ordinance violates the rights of homeless individuals because there are not available alternatives.

“The determination of whether an Eighth Amendment violation occurred will be based on whether there were enough shelter spaces available for the people challenging the ordinance,” she says, noting the city might be able to show there were spaces for the original 11 plaintiffs named in the case but not all of those evicted from the marsh or in similar situations in Eureka.