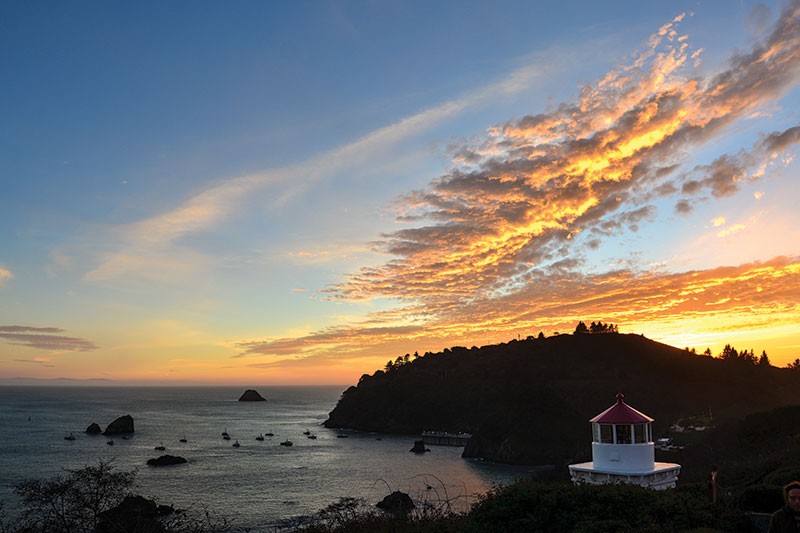 California’s iconic coast and offshore waters came under new threat not once, but twice this week as President Donald Trump signed executive orders aimed at undoing both land and ocean protections along the state’s coastline.

On Wednesday, Trump directed the Secretary of the Interior to review all or part of 24 monuments created by presidential proclamation since 1996 that make up 100,000 acres or more. North Coast residents wondering if the three Humboldt locations — Trinidad Head, Lighthouse Ranch and the Lost Coast Headlands — added by President Barack Obama to the California Coastal National Monument (CCNM) back in January would be affected don’t have a clear answer. While the CCNM isn’t expansive enough to be on the initial list, a second part of the order calls for review, "where the Secretary determines that the designation or expansion was made without adequate public outreach and coordination with relevant stakeholders.” So, while not immediately on the chopping block, California’s protected coastal lands aren’t exactly off it, either.

A similar announcement Friday morning that Trump signed an executive order opening the door to expanded offshore oil and gas drilling in federal waters off the California coast prompted even more immediate pushback from state leaders, lawmakers and coastal advocates. The move wasn’t unexpected — Just a few days ago North Coast Congressman Jared Huffman was asked about the possibility at a town hall meeting in Mendocino.

The emphasis on preventing the state from serving as a gateway to new drilling in federal waters continued when California Senate President pro Tempore Kevin de León (D-Los Angeles) and Sen. Hannah-Beth Jackson (D-Santa Barbara) announced legislation Jackson will be introducing in response to Trump’s executive order. “It’s stunning for us to learn that the new administration is considering opening California waters to new offshore oil and gas drilling,” de León said, noting that in addition to being a treasured place for Californians to relax and recreate, California’s coast buoys a $45 billion economy.

Jackson highlighted the economics according to NOAA. “California generated $662 billion in wages and $1.7 trillion in GDP in 2012,” she said. “California’s coast alone generates a GDP that is only exceeded by 11 countries – it’s that massive.” But like de León, Jackson didn’t shy away from embracing the intrinsic value of the state’s “beautiful and biologically diverse” coast. “For sake of environment,” Jackson continued, “the door that Trump wants to open must be closed, shut right at three miles [where state jurisdiction ends]. We cannot control what happens in federal waters, only what happens in state waters.”

And it’s how to wield that state control to prevent new oil drilling in federal waters that will inform her new legislation, Jackson said.

Her bill, Senate Bill 188, would prohibit the State Lands Commission from approving any new leases for oil gas development, including pipelines and other infrastructure in state waters. That means even if oil companies instigated new drilling in federal waters off California’s coast, “We would not allow transportation or make it so expensive that it doesn’t pencil out,” Jackson said. In order to get the oil onto land, she explained, companies must have facilities — and current infrastructure is not adequate, so a prohibition on expanding such could effectively stymie new offshore oil drilling in federal waters.

“Trump and oil drilling cronies may want to drill but we will stop that from being feasible by prohibiting oil from getting to shore, this isn’t a distant or abstract issue, it’s deeply personal,” Jackson finished.

In addition to being a long-time Journal freelancer, Jennifer Savage is the California policy manager for the Surfrider Foundation.