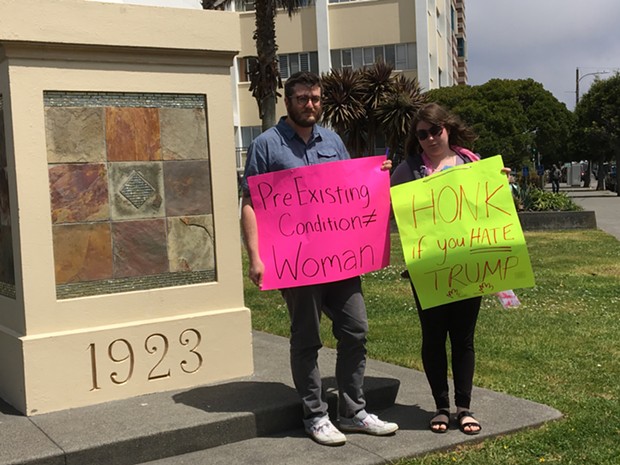 Shortly after H.R. 1628 passed by a narrow margin in the House of Representatives, Rep. Jared Huffman's office fired off a press release denouncing the passage of "TrumpCare" as a "disaster." The bill, which includes an amendment that may remove coverage for patients with pre-existing conditions, can still be altered significantly in the Senate. Huffman isn't having it.

“At its core, TrumpCare is a massive tax break for the wealthiest of Americans," said Huffman, "with the Republican Congress playing the role of a ‘reverse Robin Hood’: robbing health care from millions of Americans in order to hand out $600 billion in tax breaks to our country’s richest people and largest corporations."

According to a press release from the nonprofit Justice in Aging, the bill is also expected to have an outsized impact on older Californians, potentially raising increasing the annual cost of coverage for those in the 50-64 age group by as much as $12,900 and slashing Medicaid funding.

Only two people, John and Micha Denizio, showed up to a last-minute protest at the Humboldt County Courthouse at around 1:30 this afternoon, but another protest has been planned for 5 p.m. today, this one in response to an executive order signed by President Donald Trump that would allow religious groups to openly support political causes and candidates. The "Religious Liberty" Bill also has provisions that will exempt religious groups from having to pay for contraception for employees and staff.

Congressman Jared Huffman (D-San Rafael) today voted against H.R. 1628, the TrumpCare bill. The bill passed the House of Representatives 217-213 with only Republican votes.

“The narrow, party-line passage of TrumpCare today in the House is a disaster for the availability and quality of health insurance for my constituents and for our neighbors and families all across the country,” said Rep. Huffman. “TrumpCare will take away health coverage from 24 million Americans, gut coverage for mental health and other essential benefits, increase premiums 25-29% on average in each of the next two years, threaten funding for special education services in schools, impose an age tax on seniors, and it will once again allow discrimination against Americans with pre-existing conditions like asthma and diabetes.”

“At its core, TrumpCare is a massive tax break for the wealthiest of Americans, with the Republican Congress playing the role of a ‘reverse Robin Hood’: robbing health care from millions of Americans in order to hand out $600 billion in tax breaks to our country’s richest people and largest corporations. The Trumps, Kushners, and Kochs do not need this assistance from Congress. You know who does? The families across my district – and across the country – who rely on Medicaid, and on the health insurance that they purchase, to keep their families healthy and to recover from health crises.

“Want proof that Republicans know this is a bad deal for the American people? Look no further than the fact that they drafted it to exempt themselves from TrumpCare’s lost protections, and that they will very likely still be protected from the consequences even when their own states decide to eliminate protections.

“While Trumpcare’s passage in the House today is a hard loss, there is a long road ahead before this becomes law. We have our work cut out for us, and we will need to keep up the impressive level of engagement that made it so difficult for President Trump and Congressional Republicans to even have this vote today.”

Rep. Huffman slammed TrumpCare for its dangerous consequences that would harm children, families, and seniors, including:

o Higher Costs: Trumpcare would force families to pay higher premiums and deductibles, increasing out-of-pocket costs. On average, Trumpcare would increase out-of-pocket health costs (including premiums, deductibles, and other copays) for a Marketplace enrollee by $3,174 in 2020, when the new program would go into effect. Individuals with incomes below 250 percent of poverty would see their costs increase by $4,815.

o A Devastating Age Tax: TrumpCare forces Americans aged 50-64 to pay an "age tax" - to pay premiums five times higher than what others pay for health coverage, no matter how healthy they are.

o MacArthur Amendment: The MacArthur Amendment completely guts protections for people with pre-existing conditions by allowing states to waive Essential Health Benefits and the community rating rules, which prevent insurers from charging people with pre-existing conditions higher premiums based on their health status. This will make it all but impossible for millions of Americans fighting illness to afford the coverage they desperately need.

o Upton Amendment: All independent experts have said that the $8 billion in the Upton amendment to help people with pre-existing conditions is laughably inadequate.