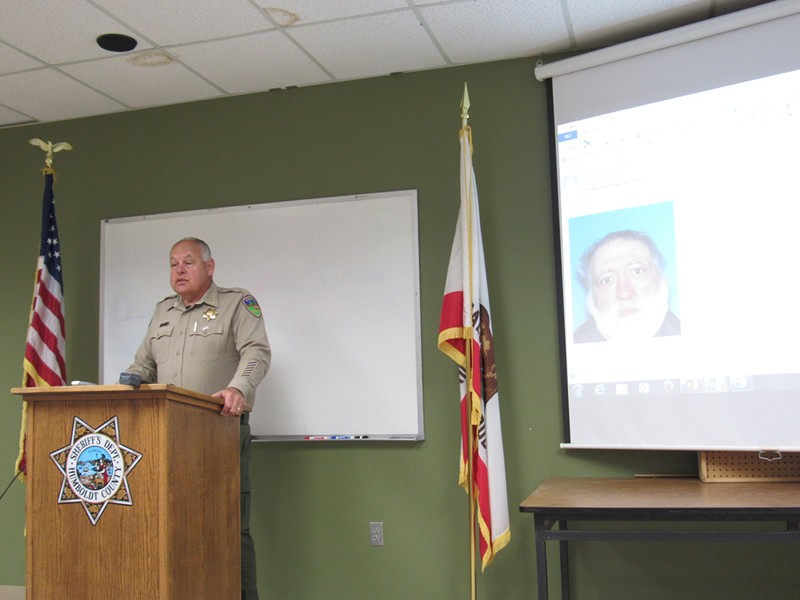 District Attorney Maggie Fleming found officers “acted lawfully” when they fatally shot a McKinleyville man after a lengthy standoff at an apartment complex in August.

David Alan Fulton, 59, who had a history of mental health issues, was killed about 2 a.m. after emerging from his flame-engulfed apartment and firing rounds at SWAT team members, some 17 hours after law enforcement was first called to the scene.

The standoff saw the evacuation of surrounding neighborhoods and a backup SWAT team dispatched from Mendocino County. Crisis negotiators were unable to talk Fulton into surrendering. While the DA's release did not name the officers involved, the Humboldt County Sheriff's Office in August identified Humboldt County deputy James Mowrey as the officer who exchanged gunfire with Fulton shortly after 9 a.m. on Aug. 17.

“Unfortunately, the peaceful end to the incident well-sought by law enforcement was prevented by Mr.
Fulton’s violent actions,” the District Attorney’s Office press release states. “District Attorney Maggie
Fleming contacted Mr. Fulton’s mother, expressed her deep regret for her loss and notified her of this decision.”


District Attorney Maggie Fleming has concluded her review of the fatal officer-involved shooting in McKinleyville on August 18, 2016.
_____
On Wednesday, August 17, 2016, at about 9 a.m., the Humboldt County Sheriff’s Office (HCSO) Communications Center received a 911 call from the area of 1770 Sutter Road, Redwood Creek Apartments, McKinleyville. The caller reported multiple gunshots within the apartment complex. Responding HCSO deputies learned that a disgruntled tenant, David Fulton, had fired a rifle across the interior parking lot at the manager’s office. Mr. Fulton was known to on-site management to have “long term mental health issues” and had telephoned numerous threats to them that morning. As HCSO deputies arrived, Mr. Fulton fired additional gunshots. One of the deputies returned fire. Mr. Fulton was not hit but retreated back inside his upstairs apartment. He remained there despite directions to exit the building from the law enforcement officers who surrounded the building. The officers learned Mr. Fulton’s female companion was also inside the apartment.

The HCSO set up a command post near the scene and secured a perimeter with the assistance of other agencies. HCSO Captain Thompson requested the assistance of the Humboldt County SWAT team. An additional SWAT team from Mendocino County was also summoned. SWAT team members began evacuating neighbors around 11 a.m. Crisis negotiators and Humboldt County mental health personnel were also on scene by 11 a.m.
Mental health personnel assisted and advised the crisis negotiation team who used a public address system to make numerous attempts to coax Mr. Fulton into coming out of his apartment and surrendering. He could be heard shouting unintelligibly, but he refused to come out. At about 1 a.m. – nearly 14 hours after law enforcement were called to the scene - Mr. Fulton fired additional shots. SWAT personnel used a light/sound distraction device to break out the front window. About 20 minutes later, Mr. Fulton’s female companion emerged from the apartment unharmed. Mr. Fulton fired more shots and the surrounding officers saw a fire growing inside the apartment. At about 2 a.m. Mr. Fulton emerged from the apartment as it became engulfed in flames, firing his rifle at the SWAT team members, striking their vehicle. They returned fire, killing him.

The Critical Incident Response Team (CIRT) investigated the fatal shooting and the events leading up to it. (The CIRT team is composed of law enforcement personnel from other county law enforcement agencies and investigators from the Humboldt County District Attorney’s Office.) In this case they were assisted by forensic scientists from the California Department of Justice and Humboldt County Fire/Arson Investigators. CIRT investigators conducted extensive recorded interviews of participants and observers of the incident and supervised the collection of physical evidence. Although the exact cause of the fire could not be determined the light/sound distraction device, electrical and natural gas appliances were all eliminated as causing the fire. The autopsy on Mr. Fulton revealed injuries from the fire and gunshot wounds consistent with the reports of the witnesses. Toxicological analyses showed he had taken two different prescription psychotropic drugs prior to the incident.

In the course of their duties, law enforcement officers may use deadly force in response to deadly force used or threatened against them. District Attorney Fleming’s review of the investigative reports on this case leads her to conclude the officers acted lawfully. Unfortunately, the peaceful end to the incident well-sought by law enforcement was prevented by Mr. Fulton’s violent actions. District Attorney Maggie Fleming contacted Mr. Fulton’s mother, expressed her deep regret for her loss and notified her of this decision.