No Foul Play Suspected in Death of Massachusetts Man 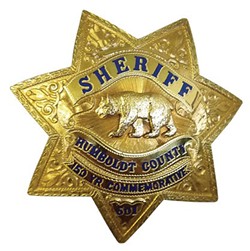 The Humboldt County Sheriff’s Office said no foul play is suspect in the death of a 44-year-old Massachusetts man found on the bank of the South Fork of the Eel River over the weekend.

According to a press release, Eric Christian Mineau, whose body was located near the base of a Garberville cliff, sustained injuries that were consistent with a fall. An autopsy has been scheduled.

Read the full release from the Humboldt County Sheriff’s Office below:


On Saturday, May 20, 2017 at about 1548 hours, The Humboldt County Sheriff’s Office responded to a report of a deceased male on the river bank of the South Fork of the Eel River. The body was located at the base of a cliff between the Sprowel Creek Bridge and the Bear Canyon Bridge in Garberville. No foul play is suspected at this time. The victim’s injuries are consistent with a fall and an autopsy has been scheduled.
The deceased subject has been positively identified as Eric Christian Mineau, age 44, of Pittsfield, MA.
Anyone with information for the Sheriff’s Office regarding this case or related criminal activity is encouraged to call the Sheriff’s Office at 707-445-7251 or the Sheriff’s Office Crime Tip line at 707-268-2539.