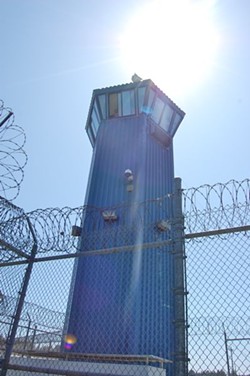 Pelican Bay State Prison officers opened fire on a group of inmates who allegedly attacked staff members trying to break up a fistfight this morning, sending five to the hospital with gunshot wounds, according to a California Department of Corrections and Rehabilitation press release.

Eight staff members were also hurt and two remained hospitalized, the CDCR reports.Their injuries were described as “significant but not life-threatening” and the release states “they are expected to be released soon.”

A Deadly Force Investigations Team from the corrections department has been sent to the prison to conduct a criminal and administrative investigation into the use of deadly force. The Office of the Inspector General was notified and the CDCR states investigators from the Office of Correctional Safety are also being sent to the Crescent City prison known for housing some of the state’s most notorious prisoners.

Read the full release from the CDCR below:

At 10:25 a.m. today, custody staff responded to a fistfight between two inmates on the B Facility maximum-security general population yard. Responding staff used chemical agents and batons to subdue the inmates; however, they refused to stop fighting.

As staff continued to try to subdue the two inmates, large groups of inmates from various areas of the yard ran toward the incident. The officers were overwhelmed as the inmates started attacking them. Officers from three armed posts used lethal force to stop the attacks firing a total of 19 .223 rounds from the mini-14 rifle and three 40-millimeter direct impact rounds.

Two inmate-made weapons were recovered; however, it does not appear at this time they were used in the attack.

Eight staff members were taken to an outside hospital with injuries. Six were treated and released and two are still hospitalized. Their injuries are significant but not life-threatening and they are expected to be released soon.

Seven inmates were also taken to outside hospitals, five of them for treatment of gunshot wounds.
PBSP officials have limited inmate movement throughout the entire institution to facilitate their investigation and they rehoused 97 inmates in the Administrative Segregation Unit.

The California Department of Corrections and Rehabilitation sent a Deadly Force Investigations Team to the prison to conduct the criminal and administrative investigation into the use of deadly force. CDCR is also sending investigators from its Office of Correctional Safety. The Office of the Inspector General was notified.