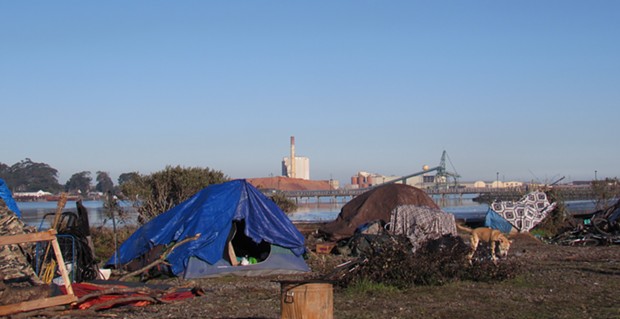 In the lead-up to the PalCo Marsh vacation, city and county officials and members of the homeless working group, emailed around articles with suggestions for what worked in other cities and states. Among these was an article written by Iain De Jong, titled “Tent City: How to Respond Effectively.” De Jong, a consultant and professor of community planning and housing at York University, is credited with having effectively resolved tent cities and encampments in more than 100 cities, mostly on the East Coast. As part of our research for our two-part series, we emailed De Jong a rough timeline of events to get an outside expert's opinion. (You can read in-depth coverage of this story on the Journal's website: Part 1, "Prelude to a Sweep," describes the decades-long issue that led up to the May 2, 2016 eviction of the PalCo Marsh and Part 2, "Swept," dives into the decision-making process and infighting that preceded the marsh's final days.)

De Jong was not consulted by the city but, after looking at the Journal’s timeline of how Eureka responded to the PalCo Marsh encampment, described what he saw as a “dysfunctional response.”


“I would say it’s an example of elected officials looking for solutions but not having experience with the issue,” said De Jong. “They were flying blind and made some poor decisions.”

The biggest problem, according to De Jong, is that the city “looked at shelter as a solution to a tent city.” Along the lines of the report from city consultant Focus Strategies, which said resources put into a sanctioned camp rather than Housing First would be a mistake, De Jong said “any temporary shelter is not a solution.”

“If you enter the question of where do you shelter the people, you’ll get nowhere,” he says. This was a concern of Eureka Police Chief Andrew Mills, who did not want to see “200 tents on Fifth Street” the day after clearing the marsh. De Jong says many people living in tent cities may have access to shelter but choose not to use it because the delivery mechanism — such as religious institution — is flawed or not a personal fit.

“Why do you offer them the thing they already rejected?” he says. “It’s asinine.”

What works according to De Jong’s experience?

Don’t make tent cities a possible solution, regardless of a lack of existing shelter options (something the city did prior to the lawsuit, depending on who you believe).

Portable toilets and access to fresh drinking water are a good idea (the city refused to do this) but allowing charitable organizations to “hand out free food, sleeping bags, tents, etc” is not. (There was a tentative alliance between city workers and the United Universalist Church, as well as a group called Friends of the PalCo Marsh, to do exactly this.)

Do not let other parts of the service delivery system off the hook as you address the tent city. (De Jong referred to the Eureka Rescue Mission, which city officials insisted was evidence that there was ample shelter and resources for those camping, as an example as a “failed approach” due to its religious affiliation. If the Mission was an effective provider of resources for everyone, the tent city wouldn't exist in the first place, he said.)

"There is perhaps no greater indictment on other failures in the service delivery system than a large tent city. This is especially true in communities that have shelters with loads of barriers, outreach teams that deliver more charity than solutions, and housing programs that go to great lengths to screen people out."
– Iian De Jong

Do not try to arrest your way out of it or damage/take people’s belongings as a “tough love” approach to resolving the tent city. (This was something EPD refused to do, despite the popularity of this idea with some constituents.)

Finally, and most damning of all: Do not have multiple messages when engaging with people on the site.

While the city did many things right (the final days of the marsh cleanup could have been orchestrated by De Jong himself), a lack of consistency in approach, contradictory messages from advocates and city officials, and tension between city employees and the city council would create a quagmire of misinformation and fear. Looking back over the chain of events in 2015 and 2016, it's apparent that people living in the marsh were hearing many different things from many different sources: This is a safe place to camp; you need to move in 10 days; bring your trash out and we'll haul it away; Pack up every three days so we can clean; you need to move in 30 days; the deadline is May 2; you can camp in this parking lot temporarily; you can't camp here anymore.

De Jong also says the surge in violence in the six months prior to the May 2 eviction — the spate of stabbings and the burning of several PortaPotties — is a trend he’s seen in other camps, a reaction to sudden changes and uncertainty.

“It’s clear as an outsider looking in, that the poverty rates are really high,” De Jong says, responding to  the question of root causes. "The issue is economic poverty.”