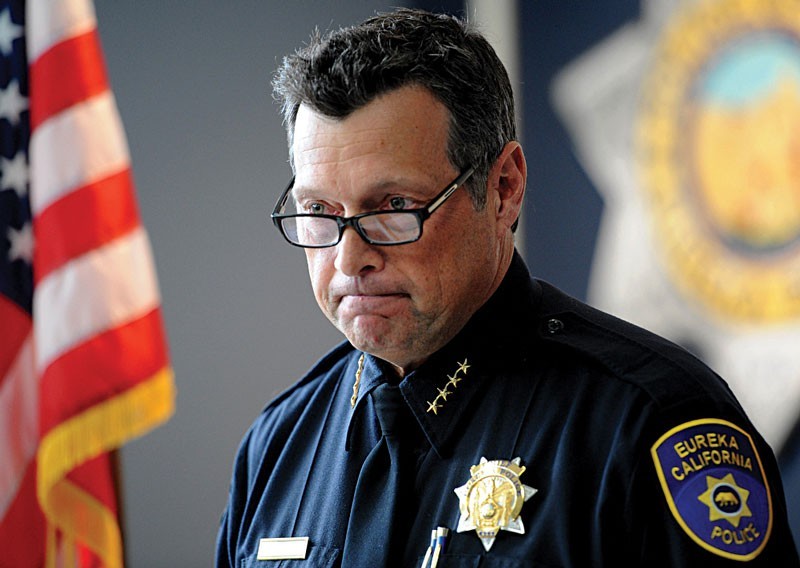 Eureka Police Chief Andrew Mills has accepted a job offer from the city of Santa Cruz and, pending a background investigation, will be leaving after three and a half years on the job here.

Reached this evening, Mills said the change is bittersweet and comes for a mixture of personal and professional reasons. Personally, he said he’s welcomed three grandchildren to his family since taking over Eureka’s chief position for Murl Harpham in September of 2013 and the remoteness of Humboldt County has made it difficult to see them. Professionally, Mills said Santa Cruz’s police chief position offers new challenges that he feels are in his wheelhouse: The city has a sizeable homeless population, gang issues and the need to continue building a stronger relationship between the community and its police force.

About a month ago, eyebrows raised when Mills’ and his wife, Cathy, put their Arcata house on the market. At the time, Mills said he had no designs on leaving Eureka but with a bull real estate market, they planned on selling their home, renting or buying a small place in Eureka and looking for a townhouse near their children in San Diego, with the ultimate goal of retiring in the community Mills policed for some 30 years before moving to Eureka.

But shortly after putting the house on the market, Mills said the Santa Cruz position posted and it seemed like a fit. Mills said that after multiple rounds of interviews he accepted the job offer Monday. He will now have to undergo a background check before accepting a final offer and then giving Eureka 30 days notice. If all goes smoothly, he said he expects his last day in Eureka will fall somewhere in late July or early August. He said he informed the city and the department of his decision today.

When hired by Eureka in September of 2013, Mills was commanding San Diego’s Western District in a department he’d worked for three decades. Originally from Michigan, Mills came to Eureka with a strong background in problem-oriented and community policing, and was well known in San Diego for his community walks and general accessibility.

In Eureka, Mills stepped into a department in turmoil. It had been under the direction of Murl Harpham, who was 80 at the time he retired, for two years after the controversial firing of controversial former Chief Garr Nielsen, who'd proven a divisive figure within the department during his four-year tenure.

Shortly after stepping into Eureka’s chief position, Mills was tasked with addressing the city’s entrenched homeless issues, most notably the encampments behind the Bayshore Mall. Under Mills' leadership, the department also saw the exodus of a number of long-tenured officers and a restructuring designed to make it more responsive to community needs.

Mills said he learned a lot from his time in Eureka and is eager to carry that over to Santa Cruz, which faces some similar issues.

“My wheelhouse is really fostering and building a relationship with the community and I know that Santa Cruz has done a lot in that area and whatever I can do to help further than and foster that, I’m really intent on doing,” he said.

When reflecting on what drew him to the Santa Cruz position, Mills pointed to a recent birthday for which he and Cathy planned on flying their children and grandchildren up to celebrate. All the flights were canceled and U.S. Highway 101 and State Route 299 were closed due to rock slides. The family never made it north. Additionally, Mills said some of his grandchildren starting to perform in dance recitals and the like, and he wants to be able to attend some of them.

“Santa Cruz is in a location where I can drive down for the weekend if I need to or fly down in a couple of hours,” he said, adding that it’s also a beachside community, which is important. “Fort Cathy and I personally, it’s in a good location.”

But Mills said he’s also very sad to be leaving behind a group of friends in Humboldt County who have become like family.

“There are truly some salt-of-the-earth, great people here,” he said. “We have, I think, as adults, much closer friends here than we’ve ever had before. We have met people that will be lifelong friends.”

As far as EPD is concerned, Mills said he feels like he’s helped usher in some progress toward a “more progressive ideology of policing,” helped improve the relationship between EPD and the community, and built trust between the department and the citizens it serves.

“That could not have been possible without the men and women of EPD jumping in with both feet,” he said. “They were ready for that.”

Mills also said he feels like he’s leaving some work undone, noting that he and his captains are just now in the process of mapping out which officers will cover which geographic beats in the city, so individual officers can get to know specific neighborhoods and their residents.

“We’re thinking through the functionality of how that works,” he said.

But Mills said one of the most significant challenges facing the department is fostering a communitywide culture that pulls officers to stay here and reduces attrition within EPD’s ranks.

“This is much greater than one person,” he said. “I’m just one spoke of many and I think this community has a great opportunity ahead of it.”