The reward for information leading to the arrest and conviction of whoever fatally stabbed David Josiah Lawson on April 15 has swollen to $21,000, the city of Arcata recently announced.

Chapman said his detectives are continuing to investigate witnesses in the case, though he noted that, aside from those initially interviewed, none of the more than 100 people at the Spear Avenue house party where Lawson was killed have voluntarily come forward.

“To date, that hasn’t happened,” Chapman said, adding that all witness interviews are valuable to the investigation, even if the witness doesn’t believe he or she saw anything related to Lawson’s death, explaining that one witness’ testimony about things unrelated to the actual stabbing can be used to test the veracity of other witness statements.

The California Department of Justice continues to conduct forensic testing on evidence collected at the crime scene, including a 10-inch kitchen knife that may have been used in Lawson’s stabbing. And Chapman said experienced homicide detectives from an out-of-area department are planning to come to Humboldt in the near term to consult with APD on the investigation.

The first 911 calls reporting Lawson’s stabbing were made shortly after 3 a.m. on April 15, and police and EMTs responded to find a chaotic scene, with Lawson bleeding to death and Zoellner badly beaten. During the hearing to determine if there was enough evidence to hold Zoellner on a murder charge, witness testimony was largely inconsistent and nobody claimed to have seen the stabbing occur. But through a series of contradictory statements, witnesses described a number of physical altercations that preceded the killing, including one between Zoellner, Lawson and two of Lawson’s friends and another between Zoellner and Lawson’s girlfriends, Lila Ortega and Ren Bobodilla. 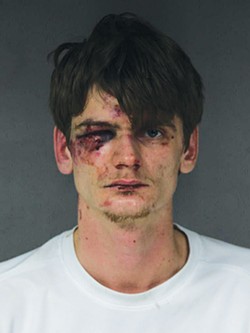 In the wake of the charges being dismissed against Zoellner, a number of parties have come forward urging APD to pursue assault charges against parties allegedly involved in the fights that broke out before the stabbing. Lawson supporters have pressed for assault charges against Ortega, and Chapman confirmed that Zoellner and his father came into APD headquarters to officially request that the department forward assault and battery allegations against Kyle and Kristoff Castillo, Lawson’s friends, on to the Humboldt County District Attorney’s Office.

There was sworn testimony during the hearing that would seemingly implicate a number of people for criminal assault but the question of how police and prosecutors should proceed isn’t a simple one, according to University of California Hastings College of Law professor David Levine.

“I can see the prosecutor has a bit of a conundrum here,” Levine said. “There’s not a clear right answer.”

Levine explained two possible approaches to the primary goal, which he said should be finding and convicting Lawson’s killer.

First, he said prosecutors could opt to charge everything they have evidence to support against everyone involved in the physical altercations that night. Then, he said, they would look to reduce or dismiss charges in exchange for full cooperation and truthful testimony. The problem there, Levine said, is that such plea deals can cast doubt over witness testimony and make a murder or manslaughter conviction harder to achieve.

“Those people can be attacked because a defense attorney can say, ‘You’re just doing this to get out of those other charges, you’re doing this to save your own skin,’” Levine said.

Because of the very visible injuries Zoellner sustained that night, any potential future prosecution of him is sure to face a self-defense argument. Assault charges against some of his alleged assailants could bolster that argument, Levine said.

The other potential approach, Levine said, is for prosecutors and police to simply continue investigating and wait until they have a clear picture of exactly what happened and what everyone’s involvement was before deciding what — and whom — to charge.

The question really becomes whether authorities believe filing assault and other criminal charges promptly would help or hinder the homicide investigation, which clearly takes priority.

“There are a number of prosecutorial tools and strategies and the prosecutor ultimately has to decide what’s the best combination,” Levine said, adding that they could decide to hold off on assault charges but change course if the homicide investigation seems to stall. “Sometimes, criminal charges have a way of improving people’s memories markedly.”

See the full press release from the city of Arcata copied below:

COMMUNITY REWARD PROGRAM ESTABLISHED FOR
INFORMATION ON LAWSON HOMICIDE
At its meeting on Wednesday evening, the Arcata City Council approved a community reward program for information leading to the arrest and conviction of the person responsible for the April 15 homicide of David Josiah Lawson. Community members have donated $21,000 to establish the fund. According to Arcata Police Chief Tom Chapman, the APD has had success with reward programs in the past and will continue to accept funds for the Lawson case reward.

Award eligibility requires that the information provided leads directly to the arrest and conviction of the person responsible. If more than one person provides identical information, the reward will be equally divided amongst those people.

Chief Chapman spoke about David Josiah Lawson’s murder investigation at the meeting. “This is absolutely an open and ongoing case… It is being worked on literally every day. We continue to interview and identify witnesses,” said Chapman. “Confidentially is an important part of criminal
investigations, which I know can be frustrating. We are 100 percent committed to the investigation as are our allied agencies.”

Chapman confirmed the California Department of Justice’s involvement in the case, stating that the DOJ is providing forensic support but will not supply investigative support until local resources are exhausted. Locally, the APD has partnered with the Humboldt County District Attorney and
Sheriff’s offices, the Eureka Police Department and the Humboldt State University Police Department to review, evaluate and analyze the investigation. Chief Chapman also confirmed that an outside agency from a large city that did not want to be named has committed two experienced
homicide detectives to the Lawson case. “It’s not uncommon for agencies to take a look at an investigation from the outside, and looking at the investigative steps, make a determination if there is something more that can be done,” said Chapman. “That is in process.”

Anyone with information regarding David Josiah Lawson’s murder is urged to call the Arcata Police Department at (707) 822-2428 during normal business hours, or (707) 822-2424 after hours and on weekends.