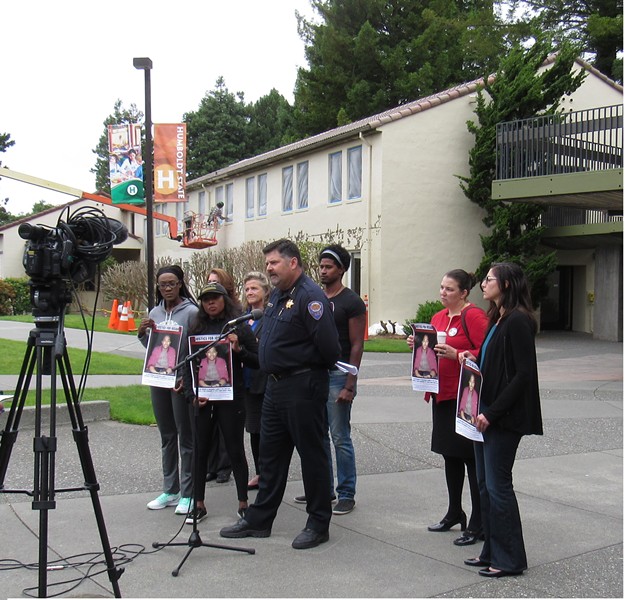 Two months and two weeks after the April 15 death of David Josiah Lawson, a 20-year-old Humboldt State University student who was fatally stabbed at an off-campus party, little in the way of new information has been made public. Today a group of Lawson's family members and friends holding Justice for Josiah posters joined Arcata city officials on the HSU quad beside Arcata Police Chief Tom Chapman as he updated media on the case.

The press conference, announced by Lawson's friend and fellow member of HSU cultural group Brothers United Elijah Chandler, was organized, according to the press release as "an opportunity for media to ask questions regarding progress of the investigation and Arcata Police Departments lack of transparency."

But Chapman was unable to to satisfy the questions of many present, saying, "its difficult to answer questions about an ongoing investigation."

The California Department of Justice has physical evidence from the crime scene, according to Chapman, and is processing DNA from various items including a knife. An estimated time on when that process will finish has yet to be announced.

"As we're waiting for these results, we're going through the logical investigative steps," said Chapman, adding that the agency had undergone a case review with sister entities and is continuing to pursue leads.

"Obviously we're looking for a conviction ... for justice for her son," said Chapman, putting his hand on the elbow of Lawson's mother, Michelle-Charmaine Lawson, as she stood with tears rolling slowly down her cheeks.

Chapman underscored that it was important for anyone present at the party where Lawson was stabbed to come forward and speak to the police.

"We know there are people in attendance who have not come forward," said Chapman. "People may not think they saw anything. If there are witnesses, if they know anyone who was in attendance, they need to talk to us."

APD, Chapman said, may find clues in even insignificant details from that night, which was apparently a chaotic scene.

Questions for the chief were answered in generalities, with Chapman declining to say which outside agencies were involved in the investigation or if there had been any significant leads besides the upcoming forensic evidence. He also declined to answer questions about whether or not charges would be filed in the alleged assault on Lawson's girlfriend, who, according to testimony, was bitten during a fight on the scene. Asked if Casey Gleaton and Lila Ortega, who were at the party with the original suspect in the case Kyle Zoellner, would be facing charges, Chapman declined to comment.

"Any arrest that's made has to be supported by probable cause," he said, eventually shutting down the question and answer session and turning the microphone over to Michelle-Charmaine Lawson.

Lawson thanked the donors who chipped in to raise a $21,000 reward for information.
She looked up at the University bookstore and reminisced about when she first visited it with hers son in 2015, and how excited he was to attend school there. She never imagined she would return under these circumstances, she told the crowd, many of whom were wiping tears from their own faces. She added that she would continue to return to Arcata to seek justice for her son, to make sure "this does not get swept under the rug."

"There is a murderer in our community," she said. "Our students are not safe."

Arcata Mayor Susan Ornelas, Vice-mayor Sofia Pereira and city manager Karen Diemer were also in attendance, holding Justice for Josiah posters in solidarity with Lawson's family. Diemer said the city is working on specific programs to help students of color feel safe in the community. Business owners have expressed interest in signs or seals to put in doorways or windows that will show their shops are safe spaces. City staff has undergone training on microaggressions and implicit bias. The city has also funded body cameras for police officers in its current budget.