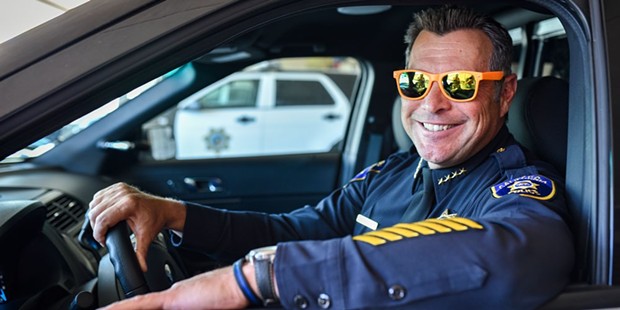 UPDATE: The Eureka City Council is not currently slated to discuss the process for replacing police Chief Andrew Mills at the July 18 meeting, which comes just three days before his last day on the job.

City Clerk Pam Powell said more information on the process may be announced next week and the appointment of an interim chief is likely to come before the council at the beginning of August.

After nearly four years on the job, Mills is heading south to Santa Cruz, where he’ll take on the same position 10 days later in a city that's double Eureka’s size but faces many of the same issues, including a sizable homeless population.

Mills announced he accepted the position back in early June but the offer was contingent on his passing an extensive background check, which was recently completed.

“It’s bittersweet,” Mills says, adding praise for the men and women of his department. “We truly love the people of Humboldt and we’ve found many like-minded friends and people with similar interests, like grandchildren, and many salt-of-the-earth people who are just fantastic.”

Being closer to his own grandchildren played a major role in the decision to make the move.

“It’s a great opportunity for Cathy and myself, and we look forward to pouring as much energy into the position and the people of Santa Cruz as we did in Humboldt,” Mills says.

Mayor Frank Jager says he expects the council will appoint an interim chief while starting a search process that will cast a wide net with the hopes of landing “someone of the same caliber.”

Meanwhile, the mayor says he has confidence in the department’s two captains, Brian Stephens and Steve Watson, and doesn’t see why one of them would not be selected to step into the interim role, noting they might also apply for the chief’s slot.

“They’re both really capable of keeping a ship on course,” he says.

Mills says he’s purposely staying out of the planning but has already given his recommendation to City Manager Greg Sparks, who is out of the office this week.

The decision, Mills notes, is ultimately up to Sparks with the council’s input.

“We’ve got two very capable guys (Stephens and Watson) in place but they may want to look further than that, as far finding the best person for the job,” Mills says. “It’s all about timing and fit.”

Soon after arriving in Eureka, Mills began making some major changes, including a restructuring of a department that had been wracked by a series of controversies in prior years — from a string of officer involved shootings to the sudden ouster of a former chief, Garr Nielsen, whose four-year run was riddled with conflict.

Those changes include a plan, currently in progress under the direction of Watson and Stephens, to set up patrol beats by specific neighborhoods, which will allow individual officers and residents to get to know each other on a more personal basis.

A drop-in farewell gathering for Mills is set for July 19 at the Wharfinger Building from 2 to 4:30 p.m.