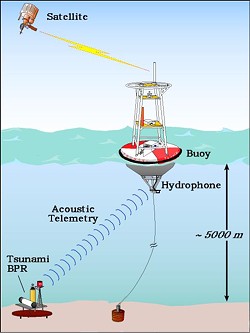 UPDATE:
The House Appropriations Committee has rejected a proposal by President Donald Trump to gut the nation’s tsunami warning system, a move one local official says could leave the West Coast vulnerable to destructives waves generated by quakes from thousands of miles away.

According to the committee’s report, the Commerce, Justice, Science and Related Agencies Appropriation’s Bill, passed on July 13, includes a recommended allotment of $973 million for National Weather Service and provisions to keep the nation’s two tsunami warning centers open.

The committee’s recommended funding level is $37 million more than the administration’s suggestion, with the committee citing the need to “maintain critical capabilities to provide weather forecasts and warnings.”

“The Committee does not adopt the proposed reduction of the Tsunami Warning Program,” the report states.

The committee also rebuffed the president’s call to eliminate $12 million in funding needed for a system of deep-sea buoys — completed just nine years ago — that transmit information on a tsunami’s trajectory to the warning centers.


PREVIOUSLY:
The tsunami warning system that has undoubtedly saved lives in coastal communities nestled along the Pacific — including our own — faces an uncertain future under President Donald Trump’s proposed budget, according to a Los Angeles Times report.

Trump has proposed shuttering one of the nation’s two tsunami warning centers and eliminating nearly 40 percent of the staff that stand watch 24-hours a day, monitoring seismic activity across the globe for a tsunami threat.

If that were to happen, says Dorie Lanni, who oversees Humboldt County’s Office of Emergency Services, not only would alert capabilities be cut by more than half but there would be no backup warning system in place.


”A major earthquake in Alaska could generate a tsunami that could reach Humboldt County in just a few hours, leaving little time to evacuate the entire North Coast,” she writes in an email to the Journal. “Closing the warning center responsible for issuing critical, time-sensitive warnings to millions of coastal residents and visitors will not be worth the cost savings during our next catastrophic distant source tsunami event.”

Trump’s spending plan would also eliminate funding for the network of deep-sea buoys with sensors that send real-time information to warning center staff about a tsunami’s movements, allowing them to more accurately ring the alarm bell for areas in danger.

It’s the very system that played a crucial role in evacuating local shorelines in 2011 after the devastating quake in Japan sent waves barreling across the ocean expanse, causing millions in damage to Crescent City’s harbor.

Where Trump’s budget will go is unclear. His spending plan has received an icy reception from many members of Congress on both side of the aisle and various proposals are expected to come forward in the coming weeks.

Meanwhile, Lanni says the warning centers are meant to provide alerts for “distance source” tsunami threats, but surges generated by a Cascadia Subduction Zone earthquake could arrive on local shores in as few as 10 minutes.