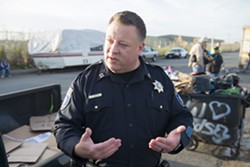 Eureka Police Department Capt. Steve Watson informed the Journal today that his team had scrapped plans for a controversial behavior-based voucher system that would have seen some homeless people have to exchange community service for meals at the St. Vincent de Paul cafeteria.

The voucher idea, one of many creative solutions proposed by EPD in order to address problems with crime and blight in the area around St. Vincent de Paul on West Third Street, would have been used as an alternative to sending homeless people found loitering, camping, littering or engaging in other low-level offenses through the criminal justice system. Instead, said offenders would be ticketed by officers and have their meal privileges suspended until they had done a certain amount of community service. Their service would be documented, at which point they could exchange this documentation for the reinstatement of meals.

In an interview with the Journal, St. Vincent de Paul staff expressed doubt about whether their small staff would be able to implement this program. Several advocacy groups, including Affordable Homeless Housing Alternatives and Friends of the Humboldt Houseless, also expressed concern with the idea. Watson said today that, after meeting with St. Vincent de Paul, the idea has been scrapped. EPD will continue to implement environmental changes to the area in response to concerns from business owners, including potentially controlling access to some alleyways and loading docks.

"We really didn't want to be seen as using St. Vincent de Paul as enforcement," Watson said in a phone interview. "At the end of the day, it was clear that this wasn't going to be the best way forward."

Watson said his team was exploring a different approach similar to that implemented by a nonprofit in Santa Cruz, which recruits homeless people as volunteers for beautification projects, rewarding the effort with gift certificates for laundry or transportation needs.

"This is constantly evolving as we try to find solutions outside of enforcement," Watson told the Journal.